With the rise of social media, so too an increase in lying

With the rise of social media, so too an increase in lying 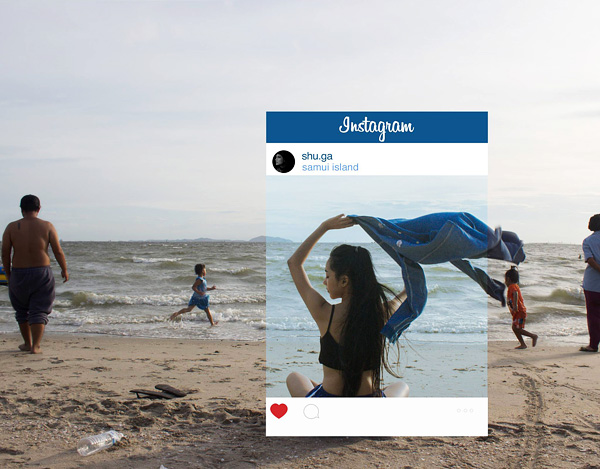 A photo from the series “The Truth Behind Instagram Photos” created by Thai photographer Chompoo Baritone shows the reality outside the frames of the cool and pretty social media photos that arouse envy from viewers. [CHOMPOO BARITONE’S FACEBOOK PAGE]

Jeong, a 35-year-old woman living in Seoul who will be identified only by her surname, has hundreds of followers on Instagram.

Her “friends” on the social networking site know Jeong as “the rich girl living in Cheongdam-dong.” That’s because the photos of her room are always picture-perfect, like a five-star hotel suite, while the photos she posts of her apartment look like one of the luxury villas in the neighborhood. She also frequently posts pictures of her vacations overseas, enjoying a nice relaxing time by the pool with a cocktail in her hand.

But according to her “real friend,” surnamed Ahn, the photos of her room are downloaded from a furniture company website, while the photos of her overseas trips are taken from other Instagram users. According to Ahn, Jeong works part time at a small company and lives in a small one-room officetel in northern Seoul. Since Jeong has to help support her parents living in the countryside by sending them part of her income, Ahn says she can’t afford to go on a trip abroad let alone a shopping spree.

According to Ahn, Jeong told her worried friend, “I am devastated every time I face the reality of my life and see the perfect lives others have on their social networks,” and that she “wanted to at least live a life that I always dreamed of online.”

Men are not immune to this trend.

A 32-year-old office worker surnamed Park is a married man living in Seoul. But among his social media friends, he’s known as a rich single doctor. By using medical terminology he became familiar with while working at a hospital, it was easy for him to gain his cyber friends’ full confidence. When he uploaded photos of a luxury sedan and an expensive watch, which are his friend’s, on his page as though they are his, several women sent him direct messages showing interest in meeting him in person. Under this false identity, Park enjoyed going on dates with these women, at least until his wife caught him in the act. Park then decided to seek psychological help.

“People usually never show interest in my real life, but when I created this life I imagine to be perfect they began to show interest and ‘liking’ the life I had and saying that they ‘admire’ my career,” he said. “It made me feel superior, which is a rare feeling to encounter in my real life. Because of that feeling, I couldn’t stop.”

Psychotherapists insist these are only a few examples of the cases they see relating to the phenomenon of “social media mythomania,” or the pathological tendency to lie or exaggerate on social media. This behavior goes far beyond merely bragging or exaggerating to involve actual lying.

According to experts, mythomania becomes even more amplified on social media as it’s difficult to ascertain the truth and say the increased occurrence is the result of people being tired of the tough reality they face and trying to escape to the virtual world.

“Those who tend to live in the shadows without any excitement in their lives often escape to virtual reality as they can’t bear the loneliness anymore,” said Nah Kyung-sae, a professor of psychiatry at Gacheon University Gil Medical Center.

“Such lies and exaggerations are taking place as these people use their personal social media pages that they’ve created as an escape. It’s their way of pursuing psychological survival,” he added, explaining that they “choose the easy route of ‘pretending’ to live the life they dream of rather than the hard way of achieving it.”

Kim Hyung-geun, director of the Seoul Addiction Institute of Psychotherapy, concurred, saying that “most people who habitually lie on their social media tend to have low self-esteem and are desperate for attention.”

Late last year, Australian teenager Essena O’Neill, who was an Instagram celebrity with more than half a million followers, announced that she was quitting the platform, saying it’s a “contrived perfection made to get attention.”

She uploaded a 22-minute video on YouTube and confessed that she made thousands of dollars from being an Instagram star and said she was obsessed with sharing picture-perfect images and getting likes from followers.

In her posts after the confession, she wrote comments such as, “Social media isn’t real. It’s a system based on social approval, likes, validation in views, success in followers,” and that she remembers how she “obsessively checked the like count for a full week since uploading [a post].”

Although she did not lie about her identity, such an obsession to prove how perfect her life is, according to experts, is the first step people take toward exaggerating in an attempt to measure up to everyone else’s awesome life, and eventually outright lying on social media, posting pictures and updates that bear little resemblance to their real lives.

Such lying goes as far as stealing other social media stars’ identities and creating copycat accounts with similar usernames. There have been numerous reports by Instagram stars insisting that a random person has illegally stolen their identity and photos, pretending to be them on the platform. O’Neill also wrote on her blog that she’s no longer using her Instagram account, and that all social media accounts under her name are not run by her, pointing out the problem of having no control of your own identity on social media.

According to Nah from Gachon University, the number of patients visiting the hospital with symptoms of social media mythomania is also increasing.

“The number of patients who are suffering from a guilty conscience, saying that they’ve become a liar by constantly posting about their fake lives on social media, has tripled in five years,” Nah said. “Most of them are also suffering from depression.”

A life of lies on social media often starts off with posting pictures of expensive goods such as luxury cars, bags and clothes, and it requires a lot of effort. Pictures of designer bags and clothes could be easily downloaded from the Internet, but for a real cover-up operation, they are said to actually purchase the goods, take a selfie with the items, and then return them for a refund. When taking trips overseas, many are said to hire photographers on-site to create photos that look natural and perfect for their social media accounts.

Catching on to the trend

Everyone’s life seems picture-perfect on social media, unlike the realities faced by Korea’s youth, who suffer from all sorts of hardship. Such contradictions have led many social media users to not take everything they see on these platforms as real.

The market research center Micromill Embrain surveyed 2,000 adults last year to research Korea’s social media trends, and among the respondents, six out of 10 said that “people only want to show the happy times of their lives on social media,” and only 6.4 percent of respondents said they believe what’s shown on social media are the real lives of users.

Early last year, a short movie titled “What’s on Your Mind?” went viral on the Internet. The film, which was made by HigtonBros, three brothers from Norway, shows a story of a man faking his life on Facebook in a bid to gain likes from his friends online. For example, the man posts a selfie with a comment stating that he went for a good jog in an attempt to show that he’s all about healthy living, but soon viewers see he had driven out to the woods to get the shot. While he’s eating take-out junk food by his laptop, he’s posting a photo of a home-cooked meal he downloaded online with a comment that states, “5 star dinner! YUM!”

Kim from the Seoul Addiction Institute of Psychotherapy, said although it’s good to see that some people are beginning to uncover the truth about social media and realizing that not all the perfect images they see of others are true, while stressing the importance of not being too self-conscious.

“Everyone has the desire to be recognized. But you shouldn’t value yourself by obsessing about how others will view you,” Kim said. “We must remember that the primary objective of social media is to keep people connected and to communicate.”

Nah also said it’s helpful to “practice turning your attention to yourself and your surroundings rather than on what others would think while using social media,” adding that it will not only enrich your real life but also balance it with your life on social media.