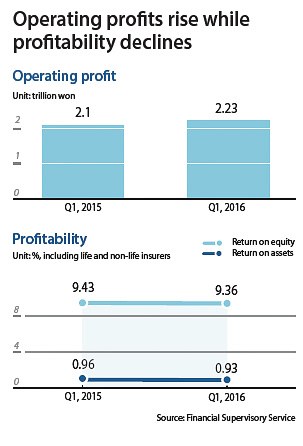 Korea’s insurance industry saw its overall operating profit rise to a six-year high during the first three months this year, but the financial watchdog has warned it to tighten its belt and put more money in reserve amid worsening profitability indicators.

According to data unveiled by the Financial Supervisory Service (FSS) on Thursday, insurers posted a total 2.23 trillion won ($1.88 billion) in operating profit for the first quarter, up 6.3 percent year on year. This was the largest since the first quarter in 2010, when the sector yielded about 2.17 trillion won.

Insurance companies profit more from the sale of insurance products and returns from investments than from monthly insurance premiums.

In the first quarter, the overall insurance industry saw declining returns from asset management and financial investments due to the continuing low interest rates.

Despite the falling returns on investments, the industry saw a boost from income from premiums after raising premiums on private supplementary health insurances around 20 percent in January and on auto insurance products around 3 percent within first quarter.

The raises followed the financial authority’s deregulatory moves last year that lifted the ceiling on premium hikes as part of its reform initiatives.

The non-life insurers mainly profited from income from premiums, which spiked more sharply than the insurance payouts, on auto and long-term supplementary health insurance products. The profit increase seen by life insurers came from an increase in income from the fees associated with variable and savings insurances, which attracted more clients by offering better interest rates than regular bank savings.

“Despite enhanced operating profit, the profitability indicators are worsening and the investment environment is forecast to be unfavorable for them due to continuing low interest rate trend,” the FSS wrote in a statement. “Also, given the strengthened fiscal soundness requirements pushed by the new International Financial Reporting Standards [IFRS], the insurance firms have to save more in reserves and enhance the balance sheets by 2020.”