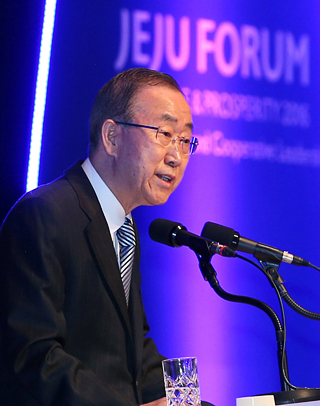 Ban arrived on Jeju Island Wednesday on a closely watched visit to his homeland in the waning months of his tenure at the UN. In a forum with senior members of the Kwanhun Club, Korea’s oldest journalists association, Ban didn’t hesitate to hint at a possible run for the highest office.

Ban’s tenure at the United Nations ends at the end of this year. The next presidential election takes place in December 2017.

Responding to a direct question about a run, Ban said he was proud to be considered as a candidate. “I never thought I will be a president, but I am proud and grateful that such a possibility is raised at home, because it means I didn’t live a life in vain and my efforts are appreciated,” he said.

Ban denied that President Park Geun-hye had contacted him about the possibility. “It never happened,” he said.

Ban is considered a strong potential presidential candidate for the Saenuri Party. The president’s allies from Daegu and North Gyeongsang have promoted the idea of forming an alliance with Chungcheong politicians to win the next presidential election. Ban is a native of Eumseong, North Chungcheong.

After Park appointed Yoon Yeo-cheol, a senior diplomat who served as Ban’s chief of protocol at the United Nations for eight years, as her new protocol secretary in February, the idea gained momentum. She appointed former North Chungcheong Governor Lee Won-jong as her new presidential chief of staff earlier this month, further fueling the speculation.

Regarding a comment that he may be too old to run, the 71-year-old former foreign minister dismissed the concern. “If you compare now with the time when President Syngman Rhee was in the office in 1948, life spans are about 15 to 20 years longer,” Ban said. “Presidential candidates in the United States are 70 and 76 years old. In an advanced society like Korea, physical strength doesn’t really a matter.”

At the meeting, Ban spent about 40 minutes in his opening remarks discussing his 10 years at the United Nations. “It was far more than just recalling his tenure,” a participant told the JoongAng Ilbo. “I got the impression that he wanted to tell the people more clearly what he achieved as the UN secretary-general and what they don’t know about him.”

According to participants, Ban said world leaders have expressed interest in his political future after the UN job. “Not just people in Korea, but many state leaders asked me what I will do after my term ends in seven months,” he said. “They all said they had read [about a presidential bid] in the newspapers and many said they will help my election campaign.”

But Ban said it was inappropriate for him to be seen paying more attention to his political future in Korea. “I am the UN secretary-general and I will ponder more about my role after my return as a Korean citizen. Right now, I want you to help me to successfully complete my mission,” Ban said.

According to participants, Ban discussed a series of crises that he had to tackle as the chief of the United Nations, particularly the global financial meltdown and food, fuel and flu crises.

“I started my tenure in 2007, and the massive economic crisis, the worst ever since the 1929 Great Depression, came in the fall of 2008,” he said. “Two to three years later, we had the Euro-zone crisis, and my tenure was harder than any of my predecessors.”

He said he had to sit down with the king of Saudi Arabia as oil prices skyrocketed. “I worked for the last decade while all the bad things you can ever think of took place around the world. In addition to my character, I had a trained spirit from Korea about the job. It was a 10-year marathon, but I ran every minute as if it were a 100-meter sprint race.”

Ban stressed his role in the democratization of Myanmar. “I spoke pointedly toward dictators while standing on the side of the weak,” he said. “Despite the opposition of the superpowers, I went to Myanmar and opened the door for its democratization. The Myanmar government clearly admits my role. No world leader was given the opportunity to speak at both houses of the Myanmar legislature, but I was given the chance as the government sincerely appreciated my efforts.”

In an apparent defense against international criticisms of his performance at the UN, Ban spoke about his frustration toward the UN Security Council. “It is a frequent joke and reality at the UN that the secretary-general is a scapegoat,” he said.

The latest criticism of Ban’s leadership came from this week’s edition of The Economist, which called him “the dullest” and “the worst” among all eight UN chiefs in history. It went on to describe Ban as “painfully ineloquent, addicted to protocol and lacking in spontaneity and depth.”

Ban’s remarks about a presidential bid were far less ambiguous than when he spoke to journalists in New York last week.

“As a diplomat, this is the strongest declaration of a presidential bid you can possibly imagine,” Rep. Park Jie-won, floor leader of the People’s Party, said Wednesday.

The Saenuri Party was sanguine about Ban’s comments.

“Although he spoke imprecisely, it was still clear that Ban has thought deeply about the future of his country,” said Chung Jin-suk, floor leader of the Saenuri Party.

“If Ban is leaning toward running for the presidency, the Saenuri Party welcomes it,” said Rep. Kim Myung-yeon, spokesman of the party.

Park loyalists in the ruling party were buoyant. “We keep hearing that a candidate from Chungcheong should run for the presidency. And now, it feels like we found a great pine tree,” said Rep. Chung Woo-taik. In Korea, a pine tree is a symbol of integrity.

Another Park loyalist, Rep. Lee Jang-woo, said Ban’s ability as a leader has already been proven.

Another faction in the Saenuri Party of Park adversaries reacted carefully, but did not denounce Ban’s emergence. “Until now, Ban spoke indirectly about his future, but the latest remarks appeared to be more progressive,” said Rep. Kim Sung-tae. “If he has a true will, he must express his intention more aggressively and clearly and join the efforts to reinvent the Saenuri Party.”

The liberal parties were sulky. “Dragging an incumbent UN secretary-general into a heated political controversy is inappropriate and irresponsible,” said Rep. Park Kwang-on, chief spokesman of the main opposition Minjoo Party of Korea. .

“The latest remarks amount to a de facto declaration of a presidential bid,” said Rep. Park Wan-ju , deputy floor leader of the Minjoo Party. “He did heighten the pride of Koreans, but I am not sure if he can do well in the tough world of Korean politics.”

Gi Dong-min, spokesman of the Minjoo Party, said the Saenuri Party has no clear frontrunner after its humiliating defeat in the April general election. “That’s why Ban stood out,” he said.

Seoul Mayor Park Won-soon, a presidential contender, was particularly critical of Ban’s ambition, citing UN resolutions that ask a secretary-general to refrain from taking a government position after retirement because a UN chief is a “confident of many governments.”

The People’s Party reacted calmly. “We hope Ban will complete his duty successfully and make a wise decision about his future next year,” said Sohn Geum-ju, People’s Party spokesman.