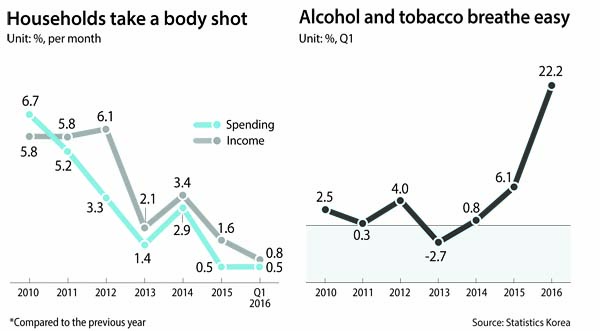 People are spending less and saving more these days, a sign of the nation’s economic troubles, meanwhile sales of alcohol and tobacco have gone up.

Average household earnings have barely changed, inching up 0.8 percent year-on-year in the first quarter to 4.55 million won ($3,857) a month.

As a result, overall expenditure has barely moved, adding 0.5 percent to 3.52 million won, indicating that more families are now saving instead of spending. However, government data shows that spending on cigarettes and alcohol continued to grow.

Average consumption fell 0.3 percent year-on-year in the first quarter to 72.1 percent, according to Statistics Korea on Friday, which means if people earned 1 million won, they only spent about 720,000.

“It appears that people are spending less money due to the weakened economy and consumer sentiment,” said Kim Ie-han, a director at the Ministry of Strategy and Finance.

The same figure hovered roughly around 85 percent during 2000s, but continued to fall starting from 2011, with 72.1 percent being the lowest number for the first quarter since 2003, when the government started to compile the data.

While the growth rate for household income has risen, it remains lower than the inflation rate, which hit 1 percent in the same period.

“Overall earned income and property income fell due to the sluggish labor market and low interest rates in the first quarter,” said Kim.

Low-income earners were affected more by the weak labor market. Income growth rates for level 1, the lowest income earners out of all five categories, fell 2.9 percent year-on-year in the first quarter, while the figure for level 2 was -0.9 percent.

People spent more on housing and automobile purchases, but less on fuel, largely thanks to low crude prices.