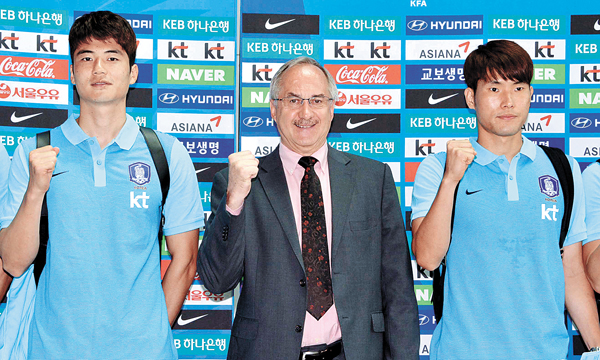 Korean football team manager Uli Stielike, center, and his players are determined as they take on Spain and Czech Republic this week in international friendlies. The team faces Spain on June 1 and the Czech Republic on June 5. [NEWSIS]

Korea’s national football team led by Uli Stielike will take on European football powerhouses Spain and the Czech Republic this week in international friendlies to test their place in the global football world.

Stielike and nine players left Incheon international airport on Sunday morning to travel to Europe prior to the matches against Spain on June 1 in Salzburg, Austria, and the Czech Republic on June 5 in Prague. The rest of the 20-men squad will join the manager individually at the training center in Salzburg before the first game.

Based on the FIFA Rankings, No. 54 Korea is no match for No.6 Spain and No.29 Czech Republic. But Stielike is determined to not be cowed before the match based on the numbers.

“Although there is a discrepancy in the rankings, we will prepare ourselves so there’s no difference in our performance,” said Stielike before departure. “What’s important is that we maintain our football philosophy and our mentality. They might put out a better showing than us but that’s a matter to discuss after the match.”

Korea’s team has something of a history with Spain. Korean fans vividly remember when the Taeguk Warriors took on Spain in the quarterfinals of the 2002 World Cup, edging them in a dramatic penalty shootout to become the first Asian team to advance to the semi-finals. But when the national team played Spain again in May 2012, they incurred a huge 1-4 loss.

“We will see if we can play possession football and put pressure on [Spain] from the top,” Stielike said. “If we cannot keep the ball to our side, then the outcome is obvious. We will also see how we go up against top-notch teams.”

Stielike is only taking 20 players with him this time, unlike his normal 23. Stielike claims the smaller roster reflected the travelling distance and his desire to give all players a chance to get on the field.

The team sounded quite determined as they boarded the plane for Austria.

“The match against Spain will be an especially good experience for us,” said striker Suk Hyun-jun. “The upcoming matches are not about showing off but about trying to find confidence in ourselves. We’ve worked hard to put ourselves in the best possible physical condition.”

Suk, along with Ki Sung-yueng and Son Heung-min, gathered early on May 23 at the Paju National Football Center to begin training for the upcoming European matches.

The game against Spain is particularly noteworthy because of the close relationship between the skippers of the two teams. Stielike and Spanish team manager Vicente del Bosque played for Real Madrid together from 1977 to 1984.

“It’s no doubt that this is a special occasion,” said Stielike about his Spanish counterpart. “It’s been a while since we’ve met.”

While Stielike is bringing the best from his quiver of players, Spain will be missing key players like Sergio Ramos and Dani Carvajal of Real Madrid and Juan Francisco Torres Belen of Atletico Madrid. Real Madrid and Atletico Madrid just faced off in the final match of the UEFA Champions League that went longer than 120 minutes, so the Royal Spanish Football Federation, Spain’s football governing body, said players from the two clubs aren’t forced to participate in the friendly against Korea. Spain is hoping to have their stars well rested before the 2016 UEFA European Championship, a quadrennial international football event that starts on June 11.