The soul of a bureaucrat

The soul of a bureaucrat 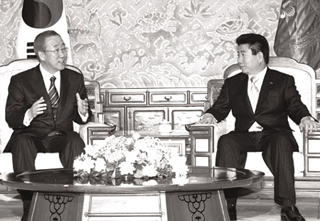 For all intents and purposes, UN Secretary General Ban Ki-moon has begun his presidential campaign.

In three aspects, his candidacy will be an important experiment. If elected, he would be the first president with a bureaucratic background, with the exception of Choi Kyu-ha, who served briefly between Park Chung Hee and Chun Doo Hwan. He would also be the first president from the Chungcheong region, and he would be the most globalized leader by a long shot, coming back after serving as head of the most international organization on the planet.

What’s most noteworthy is his bureaucratic background. Presidents in Korea have come to power through force or after significant political struggles. Lee Myung-bak was a businessman-turned-politician. There has never been a bureaucrat.

In Korea’s relatively backward political environment, a bureaucrat is caught between the nation and the administration. To be a successful bureaucrat, one must serve different administrations. A good bureaucrat should have clear ideas of national interests.

But problems arise when interests collide. When judgment and demands from the administration collide, bureaucrats suffer. Thus,
bureaucrats make compromises to survive, and in Korea, they are called soulless. They struggle to defend national interests as much as possible while not going against an administration. This may be the Korean way of keeping a “soul.”

Civil servants are very important for national development. That is why Ban’s experiment is so special. We are curious about what kind of bureaucrat he has been, whether it was right to criticize him for betraying Roh Moo-hyun and whether the souls of civil servants would suffer less if a bureaucrat were to become president.

First of all, it is not right to criticize him for betraying Roh and defecting to the Saenuri Party. A successful boss and a capable official are not in a one-way relationship. They give and take benefits. The bureaucrat should be competent and have capabilities. It is up to the boss to acknowledge his qualifications.

A bureaucrat offer his abilities and his sincerity to the boss, and the boss gives trust and opportunities. That was the relationship between Roh and Ban.

During the presidential campaign in 2002, Roh was a candidate with an anti-American stance. He exploited the tragic killings of two girls by a U.S. Army vehicle in the campaign. But after his election victory, he needed a foreign minister familiar with the United States.

A Korean-American lawyer who was a veteran supporter of Kim Dae-jung recommended Ban. When the three had a meeting, President-elect Roh told him he had already promised Prof. Yun Yeong-gwan the first foreign minister position in his administration, so Ban, who had served as ambassador, should serve as foreign policy and security adviser. Roh promised him the foreign minister job down the line.
Ban responded to the trust of the boss. Two months after Roh’s election victory, U.S. credit rating company Moody’s lowered Korea’s rating by two notches. After Pyongyang admitted developing nuclear weapons based on uranium, an anti-American administration in the South would only increase security concerns in the region. Moody’s and other companies would lower Korea’s credit rating again.

Foreign investors would leave at once. It was the first crisis President Roh faced.

Seoul sent a three-man delegation to Moody’s in New York: Blue House foreign policy and security adviser Ban; the Finance Ministry’s international finance chief, Kwon Tae-shin; and the Defense Ministry’s policy coordinating team head, Cha Young-gu. They told the agency that Roh’s U.S. policy would change and asked it to hold off on any downgrade until Roh’s visit in two months. They also visited Fitch in Hong Kong. Kwon, now president of the Korea Economic Research Institute, said that Ban suffered from diarrhea throughout the trip, as he was stressed from the pressure.

Two months later, Roh visited the United States and made pro-American remarks. Korea’s credit rating did not fall. Roh kept his promise and appointed Ban as foreign minister, and later backed him to become UN secretary general. It was a beautiful deal between a bureaucrat and a boss.

Roh Moo-hyun has passed away, and Ban Ki-moon will soon finish his 10-year tenure at the United Nations. It is up to him whether he will run, and if he does, for which party. He is 72 years old. Ban will make his choice based on his experiences, global views and political realities. Serving in the Kim Dae-jung and Roh Moo-hyun administrations, he was caught between the state and the administration, just like any other bureaucrat. Sometimes he complied, and sometimes he had conflicts. But it is important that his past has not been divorced from the national interest.

So Ban’s future should be in this country, and he should be allowed to choose his path in Korea. Roh would free him from the grave from any accusation of disloyalty. It takes a great deal to make an outstanding bureaucrat. His fate should be left to the people. If he chooses wrongly, the people will reject him. It is the core of his experiment.