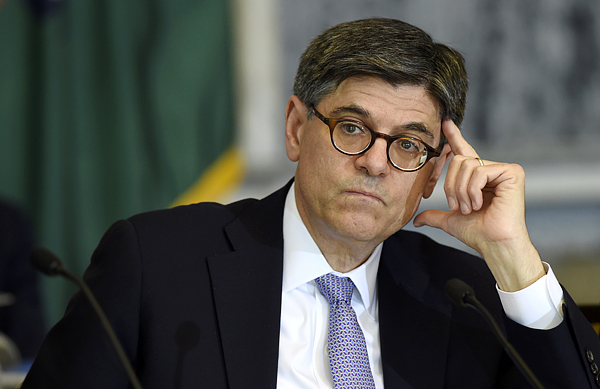 Korean Finance Minister Yoo Il-ho, left, shakes hands with his U.S. counterpart Jacob Lew before a closed-door meeting at the Seoul Government Complex on Friday. They agreed to strengthen economic ties and to cooperate on various issues such as sanctions against North Korea and measures to facilitate currency payments for trade with Iran.[MINISTRY OF STRATEGY AND FINANCE]

Because of growing trade deficits with Korea, Washington is pressuring Seoul to revise some controversial parts of a bilateral free trade agreement (FTA) that has been in effect since 2012.

U.S. Treasury Secretary Jacob Lew’s three-day visit to Korea that started on Thursday is seen as part of the pressure.

It is the first visit by a U.S. treasury secretary since March 2007, when Lew’s predecessor, Henry Paulson, came to Seoul to iron out differences in stalled negotiations on the FTA.

Lew had a closed-door meeting with his Korean counterpart, Finance Minister Yoo Il-ho, on Friday. A range of topics, including economic sanctions on North Korea, foreign exchange issues and trade were discussed.

The U.S. treasury secretary also met with Bank of Korea Gov. Lee Ju-yeol earlier in the day, raising speculation that they may have talked about the United States’ decision earlier in May to put Korea and four other countries on its monitoring list for unfair exchange rate policies.

Because calls for trade protectionism gain ground in the United States during presidential campaigns, the ministerial talks are interpreted as pressure on Seoul to accelerate and widen implementation of the trade pact by loosening regulations on the domestic legal services market.

A day before Lew’s visit, U.S. Ambassador Mark Lippert said Korea is still a hard place to do business in and urged its government to ease regulatory burdens, particularly for foreign law firms.

The United States is increasing pressure on trade partners with which it runs trade deficits, and Korea is one of them. In May, the United States put Korea and four other countries on a monitoring list to watch for unfair exchange rate policies.

The countries made it onto the list because they satisfied two of three criteria that the Treasury Department created for enhanced analysis: an economy having a trade surplus of larger than $20 billion with the United States; an economy with a material current account surplus larger than 3 percent of its gross domestic product; and an economy engaged in persistent one-sided intervention in the foreign exchange market and with net purchases of foreign currency that amount to more than 2 percent of its GDP.

Korea’s goods trade balance with the United States stood at $28.3 billion in 2015, while its current account surplus was 7.7 percent of GDP, according to the U.S. Treasury report.

This year, the United States continues to see a trade deficit with Korea. As of February, it saw a $4.7 billion deficit with Korea, according to data from the Ministry of Trade, Industry and Energy. With China, the U.S. deficit was as big as $51.1 billion.

“What the U.S. Treasury officials are perplexed about is the increasing deficits,” a Korean government official said.

Since implementation of the Korea-U.S. FTA in 2012, Korea’s surplus with the United States grew from $15.2 billion at the time to $25.8 billion in 2015, according to data compiled by the Korean Trade Ministry.

The Korean government is feeling greater pressure from the United States on trade.

On Tuesday, Senator Jeff Sessions, who is supporting Donald Trump for president, claimed the U.S. deficit spiked 240 percent after implementing the Korea-U.S. FTA.

On the same day, the United States also reportedly opposed a second term for Chang Seung-wha, a professor of law at Seoul National University and the first Korean on a World Trade Organization (WTO) panel that mediates trade disputes, because he had expressed opinions that were disadvantageous to the U.S. in trade disputes.

The WTO panel members the following day accused the United States of undermining its dispute system after vetoing Chang’s reappointment.

If more members publicly insist on Chang’s reappointment and the seat remains vacant for a longer period than expected, the U.S. might change its stance, said an official at the Korean Trade Ministry.

In March, Senator Orrin Hatch sent a letter to Ahn Ho-young, the Korean ambassador to Washington, demanding full implementation of the FTA, pointing out that Korea is doing less than agreed to in the process of determining drug prices, transparency of investigations by the Fair Trade Commission, opening of the legal services market, use of illegally copied software by government agencies and rules on offshore outsourcing of financial information.

The U.S. government wants American-made drugs to be sold for higher prices in the Korean market. It argues that Korea’s Ministry of Health and Welfare does not factor in American firms’ innovation when the drugs are subject to National Health Insurance pricing.

Another sensitive area is the automobile sector. Since the Korean vehicle industry is the largest benefactor of the FTA, there is disgruntlement in the United States that Korea’s fuel efficiency and safety testing of American cars are actually nontariff barriers to entering the Korean market.

As for the trade issue, the Korean government has a firm stance, too.

“We will make sure Korea has nothing to be ashamed of in implementing the FTA and foreign exchange policy,” said an official at the Ministry of Strategy and Finance. “One of the reasons Korea is running large current-account surpluses is that demand from the United States has risen as its economy is recovering. We will also highlight that such current-account surpluses stem from shrinking imports.”

On the legal services market issue, experts are concerned about upcoming disputes.

“Because there are many vague factors in the legal services market, even if Korea deregulates some rules, there is still large room for the United States to raise issues,” said Je Hyung-jung, a researcher at the Korea International Trade Association.