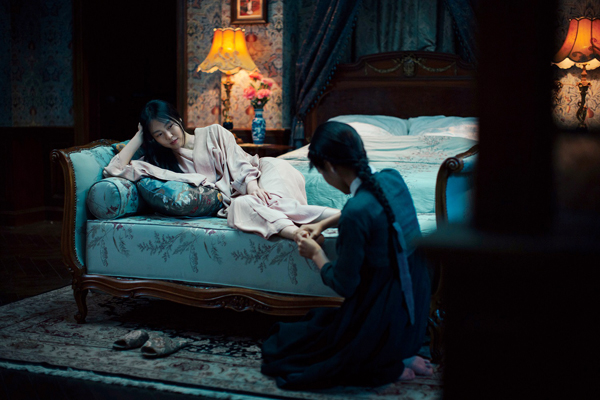 Lesbian thriller “The Handmaiden” opened on top in the Korean box office and set a record for becoming the R-rated film with the highest level of attendance during its opening week. [CJ ENTERTAINMENT]

Lesbian thriller “The Handmaiden” failed to bring home the trophy from the Cannes International Film Festival last month, but news of the film being well-received at the prestigious film festival heightened domestic buzz about star director Park Chan-wook’s latest creation.

“The Handmaiden” opened on top in the Korean box office over its debut weekend and even managed to set a new record for being the R-rated (19 and over) film with the highest attendance in its first week of opening.

It has attracted an accumulated 1.8 million moviegoers across 1,167 screens, raking in 15 billion won ($12.6 million) over the weekend, according to the Korean Film Council on Monday.

By doing so, “The Handmaiden” surpassed the record set by the Hollywood R-rated film “Deadpool,” which opened with 1.7 million moviegoers in February. 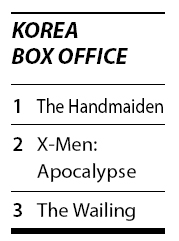 None of Park’s previous films have attracted this level of turnout in the opening week as “The Handmaiden.”

“The Handmaiden” accounted for 47 percent of weekend box-office sales.

Korean thriller flick “The Wailing” is still going strong in the local box office and it is holding on in third place.

The film’s four-week total stands at 6.3 million attendees, which is a feat for an R-rated film.

“The Wailing” has also performed well in the North American box office.

According to Box Office Mojo, “The Wailing” ranked 17th across 32 screens.

The film opened on May 20 at the Los Angeles branch of CGV, and more theaters in other cities such as Washington D.C., Las Vegas, Toronto and Vancouver began to screen the film starting June 3.

Amid the slew of dark films, romance film “Me Before You” landed in the fourth place with 178,695 attendees.

“The Angry Birds Movie,” based on the popular mobile game, dropped to fifth place. It is the only family movie among the top 10 films in the Korean box office.