Exodus of investors picks up at Saemangeum

Exodus of investors picks up at Saemangeum 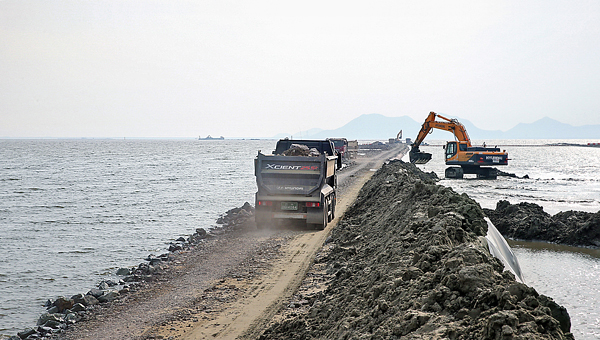 Excavators and trucks reclaim land to construct a road that connects the eastern and western part of the Saemangeum project in the city of Gimje, North Jeolla, on May 19. Construction of the road hasn’t been completed yet. [JOONGANG ILBO]

The biggest public development project ever in Korea’s history, the Saemangeum reclamation project, faces a highly uncertain future, as domestic investors pull out and foreign investors complain about incoherent administration.

At 11 a.m. on May 17, Lee Hyung-gyu, vice governor of state affairs for North Jeolla, was talking in his office with two directors from the Samsung Future Strategy Office, which makes some of the biggest decisions at Korea’s largest conglomerate.

Lee’s face turned ashen. The two directors told him that Samsung was withdrawing its investment from the Saemangeum development project.

The conglomerate announced in 2011 that it would invest a total of 7.6 trillion won ($6.4 billion) in the project over five years, starting in 2021.

On April 3, OCI, a major solar energy company in Korea, told the Korea Exchange that it was dropping a planned 3.4 trillion polysilicon manufacturing facility on reclaimed land in Saemangeum.

The Saemangeum development project began 30 years ago as an ambitious attempt to construct a 33.9-kilometer (21-mile) seawall, the longest in the world, extending from the city of Gunsan to Buan County in North Jeolla to reclaim land for industrial and agricultural use.

Used as a populist agenda by politicians, the framework of the project shifted during every election and regime change on the national and provincial level. A total of 9 trillion won has already been invested, and 17 trillion won more is planned by the government.

It’s been 10 years since the dikes blocking sea water from the project site were completed. Some 80 percent of the land for the project, however, still hasn’t been reclaimed, and the water in an artificial lake built inside the dikes, which is suppose to supply water to the industries and cities to be built, is contaminated.

Landfill and construction of factories have been delayed because the construction of a road connecting the southern and northern parts of the project site wasn’t completed due to budget woes.

“Only when the road is built can we reduce the travel distance for trucks that deliver sand and rocks used to reclaim the sea inside the embankments,” said Choi Jeong-suk, head of the management headquarters of the Saemangeum Development and Investment Agency. “The delay in the road construction is a major stumbling block in the project.”

Domestic and foreign companies that promised to invest in Saemangeum are pulling out, since basic infrastructure hasn’t been constructed despite the passage of 30 years. Since 2010, 23 pledged investments worth 11.3 trillion won have been withdrawn out of 87 private investment plans worth 14.7 trillion won.

The casino and bio industry that the North Jeolla Provincial Office has been promoting haven’t gone anywhere. Casinos haven’t shown any interest. The bio industry ambition fizzled after Farm Hannong, an agricultural company, abandoned a plan to invest in a cutting-edge greenhouse facility in 2013. The plan to build a bio-park with LG CNS, an IT company, is also going nowhere.

Many companies that withdrew investments said they had no choice, due to their own managerial or financial difficulties. But analysts say the real problem is with the project itself.

“The fatal weakness of the Saemangeum project is that some 80 percent of the land to be used to build industries still lie beneath the ocean,” said Yum Myung-bae, an economics professor at Chungnam National University. “This is why the companies are reluctant to invest. A feasible solution would be attracting investors after land reclamation has been completed.”

Some of the domestic companies that planned to invest, including OCI and Samsung, claim they have been discriminated against in favor of foreign companies.

“Domestic companies face discrimination in land reclamation costs, rents and taxation,” said a representative of a Korean company that canceled a plan to invest.

North Jeolla grants subsidies of up to 5 billion won to foreign companies depending on the size of their investment. Domestic companies, however, have to pay an undiscounted price for the industrial use of land, which is 500,000 won per 3.3 square meters.

While foreign companies can rent land for 100 years and pay reduced income and property taxes for 15 years, domestic companies are not eligible for such incentives.

Despite the favorable treatment, foreign investors are grumbling about the project.

Among the seven companies that have actually started building facilities on the Saemangeum project site, two - Toray Industries of Japan and Solvay Group of Belgium - are foreign.

Toray, the world’s biggest carbon fiber company, was the first foreign company to commit to the Saemangeum project in November 2013. It plans to invest some 300 billion won to build a 215,000-square-meter facility to produce high-performance plastics. Construction is set to be completed in 2018.

Solvey, a chemical company, has spent some 120 billion won to build a 69,000-square-meter factory manufacturing silica, a material used in making tires. Construction is set to be completed in December 2016.

Five more foreign companies are planning to build factories in Saemangeum, and their investments total 2.7 trillion won, 18.8 percent of the entire pledged investments.

Those companies complain about the complex administrative system of the project. Despite the establishment of the Saemangeum Development and Investment Agency in 2013, different government organizations are in charge of different tasks.

The Ministry of Food, Agriculture, Forestry and Fisheries led the project until 1991, and today, there are seven organizations involved in the project. The organizations have trouble cooperating with the Saemangeum Development and Investment Agency because it is difficult to reach its director, who has vice-minister status.


Analysts say the Saemangeum project needs a central leadership. They also suggest that the project has to offer substantial incentives and deregulations in order to attract investors as well as use its geographical proximity to China to attract Chinese companies.

After the Korea-China Free Trade Agreement came info effect last December, Chinese companies became more interested in outsourcing their manufacturing to Korea. Chinese investors can more easily export their products to Europe and the United States if they manufacture them in Saemangeum because of Korea’s free trade agreements with those countries.

CNPV, a Chinese solar power company, is planning a 300 billion won investment in Saemangeum. A Chinese food packaging and distribution company signed a memorandum of understanding that will allegedly bring in 36 billion won in investment.

The Saemangeum Development and Investment Agency is planning a special economic zone for Chinese companies. The agency will run a trial by forming a Korea-China economic cooperative zone then move on to forming such zones with Japan and the European Union.

“Chinese corporations should be attracted by Korea’s advanced information communications technology,” said Choi Ji-young, a professor at the Institutes of Green Bio Science and Technology at Seoul National University. “Saemangeum could become a cutting-edge manufacturing site for fresh food products, as well as a destination for tourism, environment and ecology industries.”

Analysts say that at this point, unprecedented incentives should be offered to foreign companies. Currently, like other domestic free economic zones, the project exempts foreign companies that invest over $30 million from corporate and income taxation for five years and offers a 50 percent tax cut for the next two years.

“If Saemangeum isn’t a major destination for foreign investors like Hong Kong and Singapore, it should at least try to attract as many foreign investors as possible by offering shocking incentives by revising the Saemangeum Special Law,” said Yoon Seung-hye, a researcher at Wonkwang University.

In spite of a looming exodus by investors, the North Jeolla Provincial Government, which has jurisdiction over the project, is evading its responsibilities.

“Since the Saemangeum project is located in the region, we can offer some help, but specifically said, whether companies come in or not is the central government’s responsibility, not the province,” Song Ha-jin, the governor of North Jeolla, said on Friday. “We will attract companies that will bring benefits to the region.”

When asked about Samsung’s recent pullout, Song said, “I didn’t create the problem, but I can’t say I didn’t have any fault in it when asked by the press.”

Song added that he expects Samsung to keep the promise made in the memorandum of understanding but that he is not in a position to call officials at the conglomerate and that it is difficult to reach those who signed the contract.

Regarding Kim Wan-joo, the former governor of the province who signed the memorandum of understanding with Samsung, Song said, “Since the former governor isn’t taking responsibility, I am inevitably taking the blame. There’s no other way but for the central government to talk with the companies.”

Civic organizations denounced the governor for his “timid and irresponsible statement.”

“The central government has a fault for not quickly finishing the project after initiating it,” said Lee Chang-yeop, director of a citizen’s alliance in North Jeolla. “But it’s still irresponsible for the province to just stand by.”

“It’s not about whether to stop or continue the project. Since the project is stalled due to water contamination and slow reclamation, the province should scrutinize the project’s plan, point out the flaws and recommend the most optimal solutions so it could help regional development.”