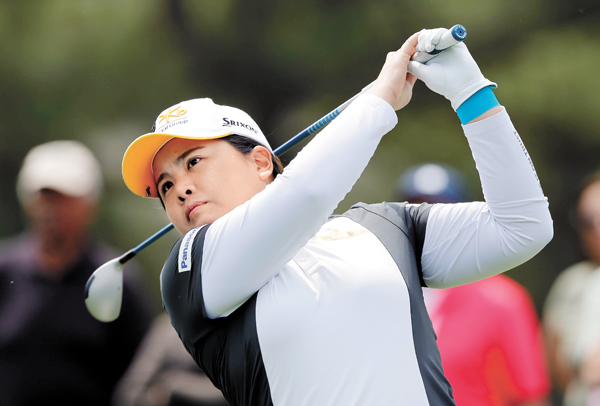 Park In-bee of Korea looks to become the first golfer in nine years to be inducted into the LPGA Hall of Fame. Park is expected to receive the honor this week after completing the first round of the KPMG Women’s PGA Championship, where she is the three-time defending champion. [AP/NEWSIS]

Park In-bee is on the verge of making history as she awaits induction into the LPGA Hall of Fame this week.

Park will achieve the honor if she makes it past the first round of the KPMG Women’s PGA Championship, which starts Thursday in Sammamish, Washington. She is also a three-time defending champion at the major event.

After this week, Park will be the second female golfer in Korea to achieve the feat after Pak Se-ri who entered the LPGA Hall of Fame in 2007 with 25 career victories.

If Park is inducted this week, then it will be the first time the LPGA has welcomed a golfer into its Hall of Fame in nine years.

To be instated into the LPGA Hall of Fame, a player must fulfill criteria set by the LPGA including a 10-year career as an active member of the LPGA, winning at least one major championship or player of the year honor, and at least 27 points. Park will fulfill all the criteria after the first round of the KPMG Women’s PGA Championship.

Park, the youngest player to win the U.S. Women’s Open at the age of 19, has been at the top of women’s golf in Korea since she made her pro debut in 2007 at the age of 18. As she gained rapid stardom in the United States, she contributed substantially to opening the door for other Korean golfers to take a shot at the LPGA. After Park, many Korean golfers such as Kim Sei-young, Chun In-gee and Jang Ha-na followed her footstep and became top golfers in the world.

Despite all her past success, it hasn’t been an easy year for Park, whose season has been plagued by incessant injuries. 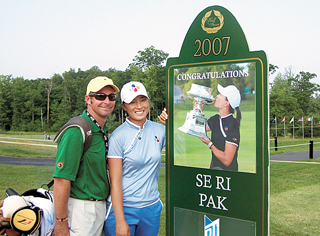 Korea’s Pak Se-ri was the first Korean golfer to be inducted into the LPGA Hall of Fame when she was given the honor in 2007 with 25 career victories. [JOONGANG PHOTO]

Park began this year with a back injury, causing her to withdraw for a month at the onset of the season. Park then played in six tournaments until a thumb injury brought her down once more.

She sat out two tournaments in May, including last week’s event, the ShopRite LPGA Classic in Galloway, New Jersey.

“It’s a tough thing for me this year, because it’s hard to find motivation when you’re injured. The Hall of Fame was something that I always dreamed of since I started playing golf, but I just thought that it was the end of my career, the last goal of my career,” said Park in an interview featured on LPGA.com.

“The Hall of Fame was what motivated me and inspired me to keep going, it’s led me to what I’ve accomplished so far.

“After achieving that, it’s like, ‘what’s next?’” she added. “I need to sit down and think about the next goal. I have a lot of other goals to shoot for. It doesn’t matter what people say, what’s important is something in my mind.”

But with the major event around the corner, Park is determined to defend her title. In fact, she likes her chances of making history this weekend by winning for the fourth straight year.

“I just like major tournaments in general,” she said. “At first-time golf courses everybody is in the same situation, everyone is playing competition golf at that course for the first time. I try to take that as an advantage. I have a major championship strategy and I just try to stick with it and enjoy the challenge.”

Park is still bothered by pain, but she’s motivated by the nearness of her goal.

“The Hall of Fame is a motivating factor to continue to play, but I know I’ll get there eventually,” said Park.

Of course, the challenge that Park is expected to encounter this weekend will be fierce, perhaps more so than ever.

Ariya Jutanugarn of Thailand, who has claimed three consecutive titles, including Yokohama Tire LPGA Classic to LPGA Volvik Championship in May, is going into this weekend’s event with huge momentum as the hottest golfer at the moment. After taking a break from last week’s ShopRite LPGA Classic in preparation for the KPMB tournament, Jutanugarn aims to claim her fourth straight victory this week.

World No.1 Lydia Ko also hopes to achieve her own feat: grabbing three consecutive major titles. Ko won the Evian Championship last September and won another major title this year at the ANA Inspiration in March.