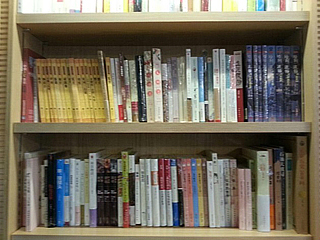 I visited a big bookstore in Gwanghwamun last week looking for some recent books written in Chinese about politics and economics.

Since May 16, the fiftieth anniversary of the launch of the Cultural Revolution in China, there has been a very heated debate within China about the legacy of Mao Zedong, which includes a diverse range of opinions. I have read a bit on the Internet about recent debates in China and I wanted to read in a bit more detail.

The foreign books section of the mammoth bookstore has been remodeled recently and I was told that there would be a Chinese book section a few months ago. That made sense. After all, there is a substantial population of Koreans who read Chinese and many Koreans take a strong interest in contemporary China. Moreover, the Chinese population of Seoul has increased not only in terms of tourists, but also in terms of exchange students and long-term residents.

There is not a single Chinese novel, or recent books on contemporary society, politics, economics or culture to be found anywhere on the remaining five shelves.

You would come away from this selection of books with the impression that there is nothing of interest being written in China these days. But that impression would be deeply misleading. Chinese writers and intellectuals are writing many serious books that offer quite valuable insights not only into contemporary issues in China, but also around the world.

I am certain that the conscious decision to ignore writing by contemporary Chinese — and the decision not to translate much contemporary Chinese writing into Korean — is not an appropriate response to the increasing demand. There are plenty of Koreans who are interested in learning more about China. Yet there is a dangerous failure by Korean opinion leaders to engage China in an intellectually rigorous manner.

China is more than a country; it makes up one out of five people on the Earth and has considerable intellectual diversity and increasing cultural vitality. Koreans, and people around the world, need to know more about China, and to follow it more closely.

Korea will need a new generation of leaders who are fluent in Chinese and who have no difficulty in reading a Chinese newspaper, or writing a letter in Chinese. Moreover, Korea will need experts not only about “China” but more specifically about Sichuan, about Guangdong, about Shanghai and Wuhan. These provinces and cities are more important to Korea than many countries in the world.

And yet most government ministries and Korean corporations have only taken the first baby steps towards creating expertise focused on specific Chinese regions. Time is running out.

There is a tremendous danger for Korea in purposely ignoring China and its intellectual and cultural development. Already I can see that there are many Koreans who are completely unaware of the recent debates on politics and economics that are taking place today in China, and who do not understand China’s own perception of its global role.

The time has come for Koreans to start taking China seriously. That does not mean Koreans should agree with everything China does.

Most Chinese themselves readily admit that China has tremendous problems. Korea must recognize that the first step towards working with China and having a positive impact on China is not to increase the amount of products traded, but rather to vastly increase the amount of intellectual and cultural exchange. We need to help the Chinese to improve transparency, to reduce pollution and to make their engagement with the world — which is already enormous — larger. But we can only do so if we first understand what China is and what the issues its faces are.