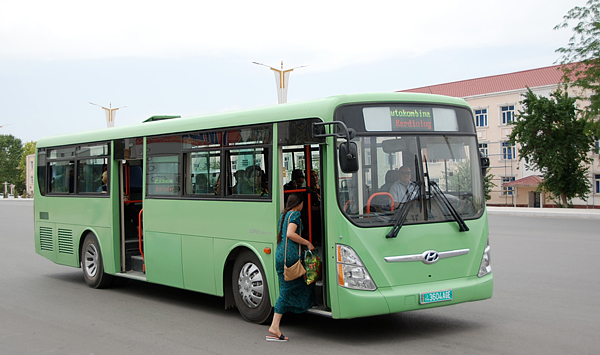 A Hyundai Aero City bus, which Hyundai Motor supplied to Turkmenistan in 2012, drives on a road in the country’s capital city of Ashgabat. [HYUNDAI MOTOR]

Hyundai Motor and Hyundai Corporation inked a deal to supply 500 large buses to the Turkmenistan Ministry of Automobile Transportation, the company said Tuesday.

The deal is worth $66 million, equal to supplying 2,600 Hyundai Sonata sedans. It is the company’s largest single contract to supply buses overseas.

The automaker will start manufacturing the buses from July and deliver them by September 2017, in time for the Asian Indoor & Martial Arts Games to be held in the Turkmen capital of Ashgabat. The country plans to improve its transportation infrastructure for the games.

Hyundai Corporation aided in financing the deal by issuing a payment guarantee.

The buses to be supplied are 11 meters (36 feet) long and have 27 passenger seats. The design, engines and ventilation systems have been upgraded to cater to the Turkmen government’s demands.

“The quality of the automaker’s city buses has been confirmed through [Hyundai] buses already on the roads of Ashgabat,” an official from the Turkmen ministry said.

The new contract owed a lot to the Korea-Turkmenistan meeting for economic cooperation attended by President Park in 2014 and a visit by Turkmenistan’s president to Korea in May 2015, where an agreement for the deal was reached.

“We expect to play our part in diplomacy,” a Hyundai Motor spokesman said.

The automaker is expanding its presence in the commercial vehicle market. It has won bids to supply 120 County minibuses to Jordan and 100 to the Democratic Republic of Congo. Total orders for commercial vehicles won this year amount to 1,600 units.