Mirae snaps up more buildings across the world

Mirae snaps up more buildings across the world 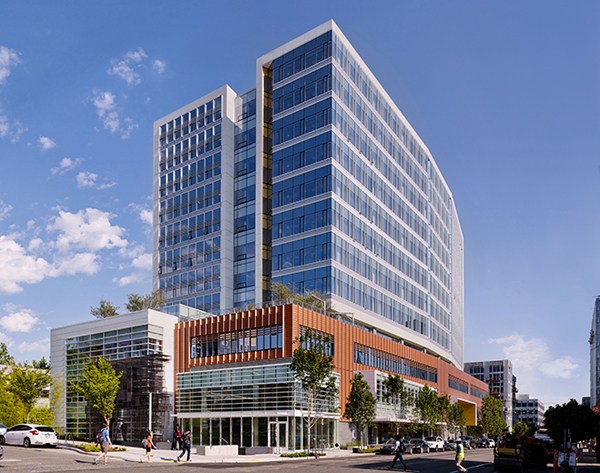 Korea’s largest brokerage, Mirae Asset Financial Group, has been flexing its muscles by going on a buying spree of prime properties overseas.

The group first set its sights on urban office buildings but later added hotels and resorts to its list after a series of its property investments generated handsome profits.

Earlier this week, Mirae Asset Global Investments, an asset management unit of the group, agreed to buy the leasehold on the Hyatt Regency Waikiki Beach Resort and Spa for $780 million from Blackstone Group, the biggest single property deal to date for Mirae.

The transaction is also the biggest single-property hotel deal ever in Hawaii, according to research firm Real Capital Analytics. 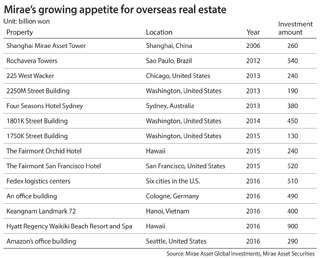 “In today’s era of low interest rates, we have few investment options that are relatively sustainable as well as profitable,” said a source at Mirae Asset Global Investments who requested anonymity.

“The property acquisition provides high yields and helps us have a constant stream of cash,” the source said.

This year alone, the group and its affiliates have purchased five offshore properties, taking the value of its property acquisitions to over 2.5 trillion won ($2.1 billion). The combined figure for the first six months of this year accounts for half of all property investments made by the group since 2006, signaling an increasingly intense appetite for real estate.

The latest deals include one of Amazon’s eight headquarter buildings in Seattle for an estimated 290 billion won, which was signed on Friday, according to multiple market sources.

Since the global e-commerce giant is bound to operate there for the next 16 years, the value of the building is expected to steadily increase.

The group’s increasing boldness in its overseas property acquisitions has to do with the higher returns it has seen in the sector.

Mirae’s first purchase was the Shanghai Mirae Asset Tower in 2006 for 260 billion won. As of the end of 2015, the property’s value had increased fourfold.

The group then bought the Four Seasons Sydney for 380 billion won in 2013. Last year, it picked up an office building at 1801 K Street NW in Washington, D.C., which counts the U.S. Federal Reserve Board as among its tenants, for 450 billion won.

More recent purchases include the Fairmont Orchid in Hawaii, a five-star resort, from a U.S. alternative investment company for 240 billion won last year.

The Fairmont Orchid, a 540-room property on the Kohala Coast, is considered as one of the most popular luxury hotels on the island of Hawaii.

The group’s chairman, Park Hyeon-joo, is said to be behind the investment initiative.

In interviews with local media outlets, he emphasized the opportunities associated with the tourism boom in countries like China.

Investors are buying U.S. and European properties that stand to benefit from the boom, as they seek high-yielding assets to park their money amid slowing economic growth.