After a rest, Park opens Assembly with speech

After a rest, Park opens Assembly with speech 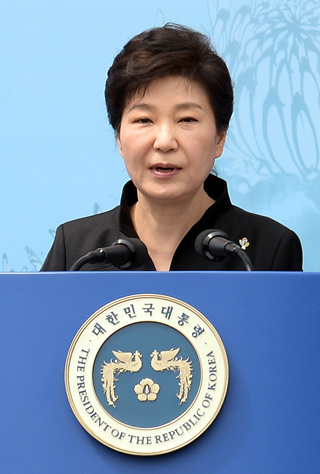 President Park Geun-hye will give a speech to mark the opening of the 20th National Assembly today, ending a week of rest to recover from fatigue from her latest overseas trip.

After returning from Africa and France on June 5, Park briefly delivered an address at a Memorial Day ceremony at Seoul National Cemetery the following day. Since then, she has rested and had no publicly scheduled events.

The president will deliver a speech at the 20th National Assembly’s opening ceremony at 10 a.m. It will be her fifth address before the legislature since she took office.

She will also become the president who has given the most addresses at the National Assembly. Presidents Roh Tae-woo and Roh Moo-hyun each delivered four speeches at the legislature during their terms.

Expectations are high that Park will stress the importance of cooperation among rival parties as her Saenuri Party is outnumbered by liberal lawmakers in the new assembly. In the April general election, the Saenuri won only 122 in the 300-seat legislature.

When she gave a speech in October last year amid a controversy over her administration’s plan to reintroduce state-controlled history textbooks, some opposition lawmakers left the chamber.

Park is expected to meet with leaders of the Saenuri Party, Minjoo Party of Korea and the People’s Party and the new speaker and vice speakers of the National Assembly before she gives the address. “When she makes the speech, she should not unilaterally request the opposition lawmakers’ cooperation for her agenda,” Rep. Woo Sang-ho, floor leader of the Minjoo Party, said Friday.

“She should explain in detail about economic issues including the industrial restructuring initiative and come clean about what has happened.”

The People’s Party also issued a statement. “If Park seeks the National Assembly’s cooperation with a humble attitude based on the spirit of the parliamentary democracy, we have an intention to actively support her,” it said.

The Saenuri Party also issued a commentary Sunday and vowed to do its best to end political strife. It said it will do its best to seek cooperation of the other parties to wrap up the remainder of the Park administration successfully.