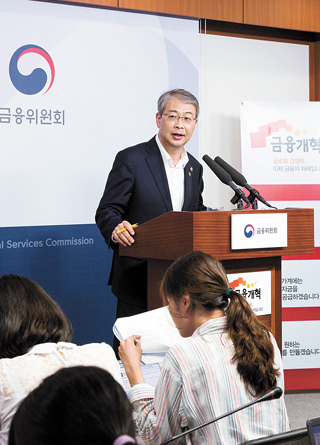 Financial Services Commission Chairman Yim Jong-yong said the financial regulator is going to overhaul the affordable health insurance market in a manner that roots out unnecessary treatments and prevents premiums from rising unfairly.

At a monthly press conference held at the commission on Monday, the chairman cited the insurance market as one of main agenda items that the FSC will target in the next few months.

As many as 32 million Koreans had affordable health care as of 2015, according to the commission. The insurance policy is designed to cover almost all types of treatments prescribed by doctors. Increasingly, doctors are reportedly recommending patients undergo unnecessary treatments, saying they are covered by the insurance policy.

“Some medical institutions and consumers are abusing the structure of the insurance policy as they prescribe overtreatments and claim insurance payments, increasing moral hazards,” the chairman said.

For example, a doctor might recommend that a patient with minor back pain undergo an MRI and a series of procedures. If the patient has the affordable insurance plan, the treatment costs are covered, and the hospital encourages the patient to undergo the procedures.

As a result, insurers are seeing increasing losses and, in turn, are raising premiums, passing on the burden to consumers, the chairman said.

The overhaul insurance plan will make it easier to stop unnecessary treatments, the regulator said. A minimum number of diseases and treatments will be covered by the insurance, reducing treatments and costs.

Under the plan, premiums of these affordable plans will decrease nearly 40 percent, the commission estimated. A new plan will be launched around April 2017.

Yim also spotlighted the shipping and shipbuilding industry, saying that the financial regulator will help improve governance of the troubled companies, not just to fix the problems in the short run but help regain industry competitiveness.

“The purpose of the ongoing restructuring should be establishing a sustainable plan to secure competitiveness, not overcoming immediate threats,” Yim said. “After negotiating the charter fees and adjust the debt problems between the companies and creditors, the troubled shipbuilders and shippers should make an overhaul in their governance structures in a way that can enhance their sales functions with a mid and long-term perspective.”

The FSC chairman will preside over meetings twice a month to keep track of restructuring progress of each company or issues regarding the restructuring, he said.

“The FSC will re-propose the unfinished financial reform bills by this year,” Yim said. “The bills to revise the banking act, capital market act and financial consumer protection act, which didn’t past the former National Assembly, and another 11 bills that will seek reforming regulatory and supervisory measures for the financial market will be discussed with the new National Assembly.”