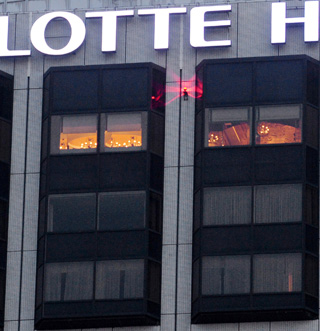 While prosecutors conduct a far-reaching investigation into Lotte Group, all the lights on the 34th floor of Lotte Hotel, where the office of Lotte founder Shin Kyuk-ho is located in Jung District, central Seoul, are turned off Monday night. [NEWSIS]

Prosecutors conducted a second round of raids on Lotte Group on Tuesday for the second time in a week amid growing allegations of improper business transactions at the country’s fifth-largest conglomerate.

The Seoul Central District Prosecutors’ Office dispatched over 100 officials to 15 locations to seize hard drives, business documents and account books. Of the 15 places, 10 were Lotte affiliates, including Lotte Chemical, Lotte Construction and Lotte International. Also raided were the homes of executives including Huh Soo-young, president of Lotte Chemical. Authorities banned Huh and other executives from leaving the country.

Prosecutors suspect the group of funneling 20 billion won ($17 million) each year to group founder Shin Kyuk-ho and another 10 billion won to his younger son Shin Dong-bin through shady business transactions and at the expense of group affiliates.

A Lotte executive told prosecutors about the channeling of 30 billion won yearly to the two Shins during questioning Sunday, according to the prosecutors.

The executive claimed they were dividends and salaries for the father and son, and were lawful.

One prosecutor said Tuesday on the condition of anonymity that investigators were looking into the nature of the payments. The official cautioned that they should not be defined as illegal funds at the current stage.

Suspicion grew that slush funds might have been created through Lotte Group’s mergers and acquisitions with its affiliates, including Lotte Hotel’s 2013 deal to acquire Hotel Lotte Jeju and Lotte Buyeo Resort.

Prosecutors reportedly suspect Lotte Hotel acquired the two resorts for less than market value. The Friday raid on Hotel Lotte and the raid of affiliates on Tuesday suggest that prosecutors are looking into whether the 2013 merger was for the creation of slush funds for top officials.

Prosecutors said Tuesday that there have been attempts by Lotte officials to remove and destroy what could be evidence of criminal conduct.

“In one instance, nothing was found in the desk drawers of the CEO and employees at a concerned Lotte affiliate,” the prosecutor said.

In addition, all safes at that affiliate were empty. In Friday’s raid, nothing was found in a safe at the office of Shin Kyuk-ho.

But 3 billion won belonging to Shin was found in the house of a former Lotte executive’s sister-in-law.

Tuesday’s raid of Lotte Construction raised speculation that investigators are now looking into whether Lotte bribed key government and military officials during the Lee Myung-bak administration to win approval for the construction of Lotte World Tower, Korea’s tallest building, which will be completed by the end of this year. Lotte Construction was the builder.

The raid of the construction company on Tuesday sparked speculation that Lotte Corporation, spared in the first two days of raids, could be the next raid target as it is the developer of the controversial tower.

The raid of Lotte Construction came after a local daily, Segye Ilbo, reported Tuesday that the group had given 1.2 billion won to a retired Air Force general lieutenant surnamed Chun to allegedly help it clinch approval after years of failed attempts to erect the monumental tower.

In 2009, the Lee administration gave a green light for Lotte to build the 123-story building in Songpa District, southern Seoul. The approval came more than 10 years after the group had first come up with the project. Lotte had been thwarted from going ahead because the Air Force worried the 200-meter (660-foot) building would only be 5.7 kilometers (3.5 miles) from Seoul Air Base, a key strategic military installation to protect the capital area in case of an attack by North Korea.

The Lee government granted construction approval on the condition that the military shift a runway by 3 degrees. The sudden change of position by the government led to speculation that the group had lobbied government and military officials to win the approval.

In response to mounting questions, an Air Force official said Tuesday that the decision to allow Lotte to construct the tower was made “following legitimate procedures.”

“The military maintained its position that the safety of flights should be the priority,” the official said on the condition of anonymity, “and their execution capability must be sustained [in regard to the Lotte World Tower construction].”