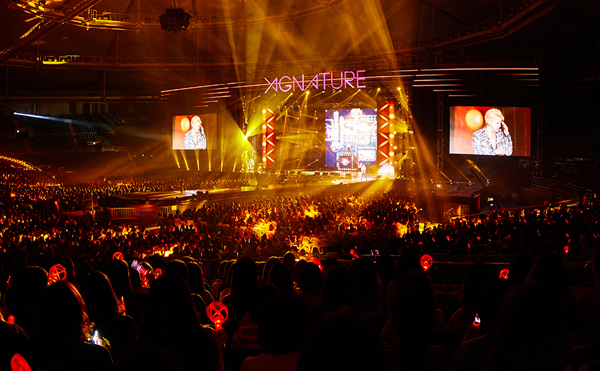 Kim Jun-su, also known as Xia, performs during his solo concert at the Gymnastics Arena of Olympic Park in southeastern Seoul over the weekend. The two-day concert series kicked off his Asian tour to promote his 4th album, “Xignature.” [PARK SE-WAN]

Kim Jun-su, also known by his stage name Xia, is a singer with a global fan following, a member of the popular K-pop trio JYJ and a successful musical actor with strong ticket power.

But the artist had a rough start.

After six years of training with SM Entertainment, Kim finally made his debut in 2003 as one of the original members of the boy group TVXQ.

However, a few years later in 2009, Kim and fellow group members Kim Jae-joong and Park Yoo-chun decided to file a lawsuit against the agency over unfair contracts.

During the three-year legal battle with the top entertainment company, the three singers, who formed a new group with a new agency, faced touch times, being unable to hold concerts or appear on TV in Korea. The group had no choice but to go abroad, where they hit it big.

Now, with millions of fans worldwide, Kim performs on any stage he wants. As a successful solo artist who recently released his fourth album, Kim picked the Gymnastics Arena of Olympic Park, known to be only available to world-class artists due to its grand size, as the venue for his concert in Seoul to kick off his Asian tour.

The two-day concert was held last weekend, and Kim managed to fill up the 10,000-seat arena on both nights, not as part of JYJ but as a solo artist.

His performance included new songs from his latest album, “Xignature,” which was released on May 30. To provide the best experience for his fans, even those sitting at the far end of the venue, Kim flew out above the crowd using wires from time to time, giving the screaming fans a chance to see the singer up close.

Kim is known as an artist who doesn’t do television appearances. He says he believes the best way to interact with his fans is on stage through concerts.

His fourth album was even planned out with a live concert in mind. That’s why there are more than 10 different genres of songs on the album, so that the audience at concerts won’t get bored listening to the same types of songs.

After the Seoul concerts, Kim will tour around eight cities, including Guangzhou, Shanghai and Hong Kong, holding 15 concerts in total.

Prior to the Seoul concerts last weekend, Ilgan Sports, an affiliate of the Korea JoongAng Daily, interviewed Kim. Here are some edited excerpts.

Q. This will be your first time performing at the Gymnastics Arena on your own. How do you feel?

A. I just have a feeling of gratitude for the fans who always come to my concerts wherever I have them. Because I don’t do any television shows, it’s really exhilarating for me to hold such a big concert on my own, as it’s the only way for me to meet with my fans.

That’s why I feel like I should really prepare for it, to not get exhausted at the concert and really please my fans.

What can you tell us about your fourth album, “Xignature”?

Every time I release an album, I put the most importance on holding concerts. Because I have to design the concert according to the album, I have no choice but to pay more attention to the songs, how many genres there are and what order they are in and things like that.

Because I also want to differentiate the upcoming concert from the previous one, the new album also has to be unique and more different. I believe providing the audience with different experiences each time they come to my concerts is the least I can do to show my appreciation.

There are more than 10 new songs on the album. Wasn’t that too much for you?

I wanted this album to include as many songs as possible. In fact, this is counter to the current music market trend of releasing fewer songs at once, as only a few songs become hits. But I wanted to try out as many genres within the album as possible and just follow my own path.

It was quite a surprise that your title track was a dance tune and not a ballad. Is there a reason for this?

I hear a lot from others about why I insisted on dance music. But like I said earlier, when I think about staging a concert, it’s difficult to picture myself singing a title track at my concert that is a ballad. I wanted something more exciting and toe-tapping, so I went for a dance tune, all for the concert.