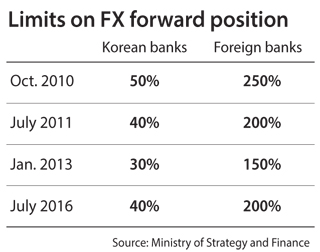 Korea’s financial authorities on Thursday came up with a set of pre-emptive measures to protect the local market from wildly fluctuating foreign exchange (FX) rates.

The moves come amid volatility in the global financial market due to changes in rate policies and geopolitical issues, including the United Kingdom’s possible exit from the European Union, the so-called Brexit.

The Ministry of Strategy and Finance, Financial Services Commission, Bank of Korea and Financial Supervisory Service agreed to loosen the current regulation on banks’ FX forward positions and adopt a new liquidity coverage ratio (LCR) regulation to give banks greater flexibility in responding to possible capital inflows and outflows.

FX forwards are a financial derivative. In an FX forward transaction, a buyer and seller agree on an exchange rate for any date in the future. The transaction then occurs on that date regardless of current market rates.

The regulation on FX forward positions limits the percentage of foreign currency assets that banks can hold to mitigate the risk of sudden changes in exchange rates. It was introduced in 2010 when the United States began printing extra greenbacks as part of its unconventional quantitative easing after the 2008 financial crisis. The purpose of the regulation was to contain growth in short-term foreign debt in response to a large inflow of dollars.

The authorities said position limits will be expanded back to 40 percent for Korean banks and 200 percent for foreign banks starting July 1.

Raising the percentages back to the pre-2012 level means there is less risk of banks overloading on foreign currencies or debt.

“The FX forward position regulation was introduced to manage the growth of short-term foreign debt at a time of growing capital inflow pressures stemming from expansionary U.S. monetary policy and a boom in the shipbuilding market,” an official at the Finance Ministry said.

“But now, capital outflow pressures are growing as the U.S. has turned to an austerity policy and Britain is highly likely to exit the European Union, so the regulation needed a revision in accordance with the changing market conditions.”

As the U.S. Federal Reserve is highly expected to raise its base interest rate next month, Korean financial authorities are anticipating some capital outflow in the coming months.

Although the U.S. Fed decided to keep the federal fund rates at the current 0.25-0.50 percent during the June meeting of the Federal Open Market Committee on Wednesday, local time, Fed Chair Janet Yellen left room for a possible adjustment next month.

Meanwhile, the Bank of Korea slashed its base rate from 1.5 percent to 1.25 percent a week earlier, and even hinted at a further rate cut in the next few months.

As the difference between the interest rates of Korea and the U.S. is expected to widen over time, significant capital outflows are anticipated.

Along with the U.S. rate plans, the rising possibility of Brexit have been increasing fear and weighing on the Korean financial market in recent days.

Seoul’s main bourse Kospi continued falling for the last six days despite the Bank of Korea’s rate cut. The Korean won has been fluctuating against the dollar throughout this month, and it is difficult to predict its direction.

Abnormal appreciation of the yen, despite the Bank of Japan’s unprecedented negative interest rate, is also adding to the uncertainties in markets around the world.

“Risks are growing as the possibility of Brexit increases and the delay in the U.S. rate increase is unexpectedly turning into a concern,” said Seo Jung-hun, an analyst at Samsung Securities. “As uncertainties continue [until the Brexit referendum next week], investment sentiment around the world will remain weak, while investors will flock to safe assets like the yen.”

The authorities also created a new LCR regulation to comply with the voluntary global banking rules referred to as Basel III.

According to the rules, banks must hold sufficient amounts of foreign currency assets, including cash and bonds, that they can use to replace outflows whenever foreigners exit the market.

Foreign banks operating in Seoul and the Export-Import Bank of Korea will be exempted from this new rule.

The government will have banks increase the holdings by 10 percentage points every year. Basel III requires all banks to hit 80 percent by 2019.