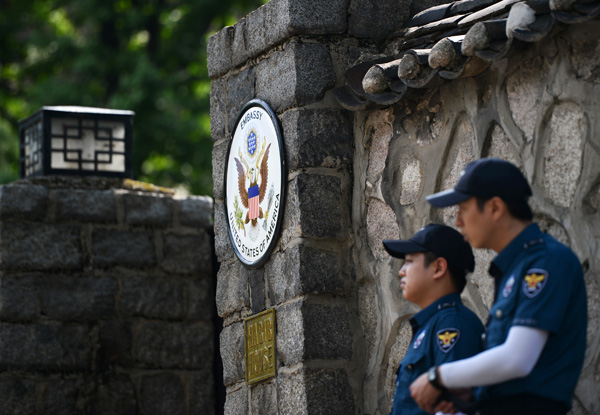 The Islamic State has designated U.S. military bases in South Korea and one South Korean citizen as targets for attack, the nation’s intelligence agency reported Sunday.

According to the National Intelligence Service (NIS), the militant group also known as the Islamic State of Iraq and Syria (ISIS) has distributed the coordinates of military bases run by the United States and North Atlantic Treaty Organization (NATO) alliance around the globe, as well as the personal information of people from 21 nations against whom it vowed “revenge.”

The NIS reported ISIS had obtained some of the data through its own hacking group, the “United Cyber Caliphate,” and distributed it among members through the encrypted chat app Telegram.

The intelligence agency said that in the case of Korea, that information included detailed geographical coordinates and satellite images from Google Maps of U.S. Air Force bases in Osan in Gyeonggi and Gunsan in North Jeolla.

“The personal information of one worker at a local welfare organization, including their name and e-mail address was also disclosed [by ISIS],” said the NIS in the press release.

Asked why the radical group had targeted that particular person, an NIS official told the Korea JoongAng Daily that the agency “was in the process of finding out why.” The official spoke on the condition of anonymity and refused to name the welfare group.

The NIS said it appears ISIS obtained the personal data from hacking the welfare organization’s website. The information about U.S. bases appears to have come from freely available sources online.

This is not the first time ISIS has threatened to strike South Korea. In a video released by the group last November, ISIS presented the flags of 60 countries including South Korea that it considered its enemy.

It also placed South Korea on a list of target countries last September.

According to the NIS, about 50 foreigners have been expelled from the country over the last five years for affiliation with terrorist organizations. Two South Koreans “disgruntled with society” have also been busted for trying to join ISIS, the NIS added.

The intelligence agency said it would continue to work hard to prevent terrorist attacks.

As part of a counterterrorism bill passed in March, the NIS established a center under the Prime Minister’s Office to collect information, access financial data and eavesdrop on and wiretap possible terror suspects.

The South Korean National Police Agency said on Sunday that it is bolstering its readiness posture against terrorism after the notification by the NIS. It said it plans to cooperate with the U.S. Forces, including a review of sharing of information, and also increase regional patrol.