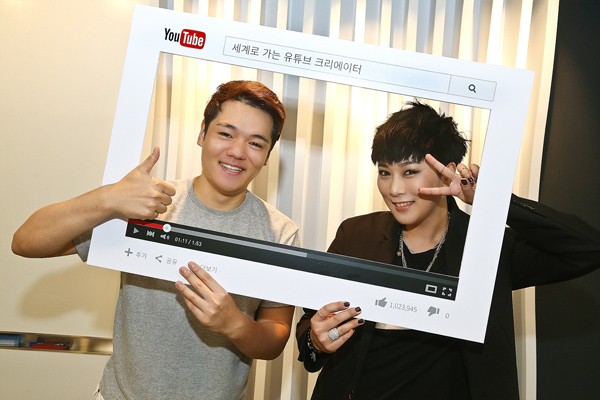 Park Su-hye and Kim Seung-min can still remember a time when they were ordinary people.

That was three years ago, before they became famous on YouTube.

These days, Park - better known as SSIN - has nearly a million subscribers on her channel, where she posts about beauty products.

Kim, who goes by Toy Monster, started a channel last year that shows kids how to make new toys out of things like colorful clay and candy. He currently has 1.4 million subscribers.

Many of their fans live outside of Korea. Ninety-eight percent of watchtime of Kim's YouTube channel is from abroad.

Having more than 100,000 subscribers means that a YouTuber can use the site to make a full-time living, according to Park Tae-won, who leads YouTube’s online partnerships team, during a press conference at Google Korea on Wednesday.

He declined to specify exactly how much YouTube stars regularly make.

YouTube held the event, which included talks by SSIN and Toy Monster, to highlight the success and potential growth of Korean YouTube stars in the international market.

According to Park, statistics show that more and more foreign viewers are spending time on Korean YouTube channels.

“Viewership statistics measuring Korea’s top 100 YouTube creators’ channels indicate that the number of hours spent on those channels by foreign viewers has increased threefold as of May compared to the same period last year,” Park said.

The number of foreign subscribers to Korean YouTube channels has grown 1.7 times during the same period, he added, emphasizing their growing influence

SSIN and Toy Monster aren’t the only Korean YouTubers recording millions of views.

Left: Violinist Jenny Yun recently started receiving attention after posting a video of herself playing the violin while dancing along to the song “Cheer Up” by K-pop girl group Twice. Right: Pony generated buzz when she did her makeup to look like Taylor Swift. [YOUTUBE SCREEN CAPTURE]

One of the most notable is Pony, who used to be the makeup artist for CL, the rapper of K-pop girl group 2NE1.

Pony generated huge buzz in March, when she posted a makeup tutorial on how to look like American pop star Taylor Swift. The video recorded 400,000 views in three months. As of June 15, it had been watched more than 1.4 million times.

The video astounded many both in Korea and abroad, and was written up in magazines like Women Daily and Cosmopolitan UK.

Three factors have contributed to the global success of Korean YouTubers, according to YouTube, SSIN and Toy Monster.

The main reason is the growing popularity of Korean culture writ large - the so-called Hallyu, or Korean Wave of cultural content.

But others include the addition of subtitling and collaboration with foreign content creators.

That is evident in the response to videos uploaded by violinist Jenny Yun. She currently has just under 50,000 YouTube subscribers, and most of her videos get fewer than 50,000 views.

That changes when she posts a cover of a K-pop song.

After she uploaded herself playing the song “Cheer Up” by popular K-pop girl group Twice in May, the video got more than 180,000 views within six days.

Another way Korean YouTubers are getting recognized is through the addition of subtitles provided by both YouTube and fans.

In order to make it easier for foreigners to find Korean content, YouTube adopted a tool utilizing metadata last year that allows the titles of videos, as well as short explanations about the content, to be automatically translated into different languages.

“The title and short explanation of the videos are some of the most crucial factors to have videos exposed to global fans,” he said.

The tool makes it easier for foreign viewers to search for Korean content without a language barrier. It currently supports people to navigate YouTube in a total of 76 languages used by 95 percent of the internet population.

Korean YouTubers are also getting a big boost from their fans, some of whom are voluntarily translating their favorite videos into multiple languages. The stars often give special shout-outs in videos to fans who are the most helpful.

One final reason Korean YouTubers are succeeding in the global market is active collaboration with foreign stars, which exposes them to a whole new group of potential fans.

“I collaborated with Japanese YouTube star Kumamiki last year,” SSIN said at Wednesday’s event. “I prepared styles of makeup that Japanese like, and after the show, the number of Japanese followers subscribing to my channel has dramatically increased.

“I think it was a good opportunity for me to get exposure with Japanese viewers.”