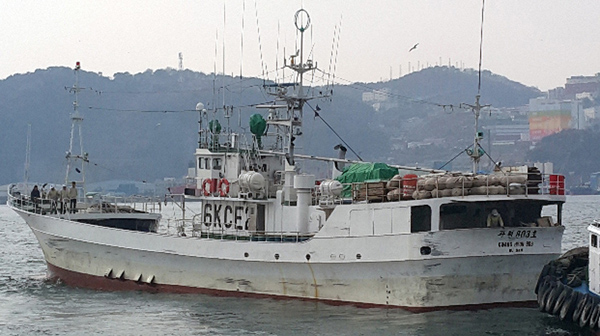 The 138-ton fishing vessel Kwang Hyun 803 on which two Koreans including the captain were stabbed to death by two Vietnamese crewmen Monday at 1:58 a.m. [NEWSIS]

Two Vietnamese crewmen fatally stabbed a Korean captain and engineer on a deep-sea fishing vessel navigating the Indian Ocean, according to the Busan Coast Guard on Monday.

The Coast Guard said that around 2 a.m. Monday, the suspects killed the 43-year-old captain, surnamed Yang, and a 42-year-old chief engineer, surnamed Kang, aboard the 138-ton Korean-flagged Kwang Hyun 803.

Both suspects were 32 years old and were said to be intoxicated when they attacked the captain and engineer off the coast of Somalia.

They were suppressed by other sailors and locked up aboard the vessel, according to the Coast Guard. 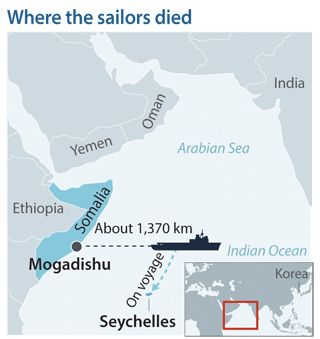 There were 18 crewmen aboard the vessel - three Koreans, seven Vietnamese and eight Indonesian.

After the attack, an Indonesian mate contacted maritime authorities.

The ship’s navigator, the remaining Korean crewman surnamed Lee, 50, is steering the ship and is expected to arrive in a port in Victoria, the capital of the Seychelles, in four days.

The Busan Coast Guard decided to dispatch seven investigators to the scene to question the suspects.

Authorities will investigate whether the murder was committed accidentally from intoxication or if it was a premeditated mutiny.

“I don’t know how such a thing could have happened,” Kim Yeong-do, 60, the head of Kwangdong Shipping, the operator of the ship, told the JoongAng Ilbo on Monday. “There was no delay in payment to the foreign crewmen nor were they spoken to rudely.”

Foreign sailors received an average monthly wage of $700 to $900, he said.

According to Kim, all crewmen underwent reviews for criminal records and passed without any problem. The vessel departed 18 months ago.

He said that working conditions on deep-sea fishing vessels depended on the captain, and sometimes sailors’ sleep time may be switched to night or day, but that crewmen would be guaranteed at least seven to eight hours of sleep a day.

The Korean Ministry of Foreign Affairs said it is working closely with the Coast Guard, and will provide support for the investigation and necessary advice on judiciary procedures through its embassy in Ethiopia.

“We plan to provide support for the funeral procedures for the deceased and for their bereaved families,” the ministry said.

The family members of Kang and Yang are expected to head to Victoria by flight to coincide with the arrival of the ship.

There have been cases in the past where foreign crewmen have killed Korean sailors in mutiny.

Most notably, in August 1996, a group of six Chinese sailors aboard the Honduras-registered Pesca Mar No. 15, operated by a South Korean firm, revolted while navigating the South Pacific and killed 11 crewmen including seven Koreans.

Last year, an Indonesian crewman killed a Korean engineer on another deep-sea fishing vessel off the coast of Africa.

There have also been cases of Korean sailors acting violently against foreign crewmen.

In 2011, 32 Indonesian sailors working for the Korean trawler Oyang 75 walked off at a port in New Zealand to protest their working conditions and regular assaults.