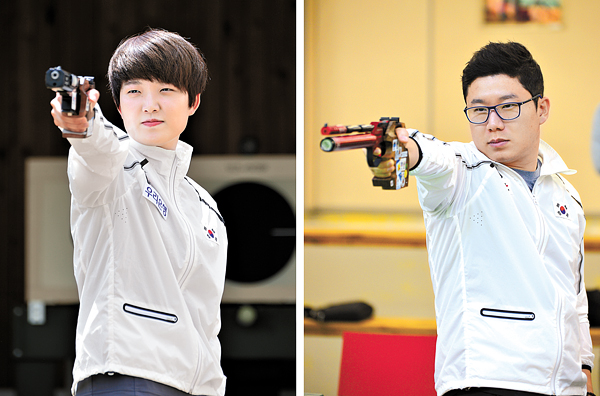 How many medals will the Korean shooting team bring home from the Olympics? As the gold mine event for Korea, shooting carries great expectations that Korea’s team will add to their accolades at the Summer Games. Park Sang-soon, head coach of the Korean shooting team, has an idea of how his team’s report card from Rio might turn out: two golds, two silvers and one bronze.

“It’s quite the pressure to go into the upcoming Olympics, given how well the team did in the previous one,” said Park.

The team will have 17 shooters in Rio this summer, including three-time Olympics gold medalist Jin Jong-oh, and Kim Jang-mi, who topped the women’s 25-meter pistol event in London.

Jin clinched gold in the 50-meter pistol category in the 2008 Beijing Olympics, and repeated the feat in 2012 while adding another gold in the 10-meter air pistol.

Korea has earned 107 medals combined from the past summer and winter Games, but has yet to have an athlete who has medaled gold in a single event in three different Olympics.

Jin said he feels pressured to win a third gold in the 50-meter pistol in Rio. “I think it’s going to come down to whether I can break free from that pressure.”

For the 36-year-old shooter, the Rio Olympics is a great opportunity to challenge his limits.

“The lighting at the arena in Rio is quite different [than what I am familiar with],” said Jin, sounding a little concerned. “The ceiling is high and it is bright inside the arena. We have to be able to overcome the different variables.”

“Since the London Olympics, I have always pushed myself to remain at the top. The Olympic heat has not yet reached Korea but if people cheer us on, we will make sure to reciprocate that with dramas and wins,” Jin said.

Indeed, Jin has been hustling for the past four years, trying to stay within the top pool in shooting globally. At the moment, he is one of two Koreans who can find their names in the top 10 of their main events. As of Wednesday, Jin is ranked third in men’s 50-meter pistol and eighth in men’s 10-meter air pistol. Other than Jin, Kim Jun-hong, who’s also on the Olympic team roster alongside Jin, is ranked third in men’s 25-meter rapid fire pistol.

“Since I started shooting, the Olympics has always been my dream,” said 26-year-old Kim. “I am quite thrilled and nervous about going to my first Olympics.”

Although this is the first Olympic for Kim, he is by no means a rookie. He climbed to the top during the 51st ISSF World Championship in Granada, Spain in 2014, where he claimed the 25-meter Rapid Fire Pistol Men title, beating the German Oliver Geis. He also saw himself on top of the podium in two occasions during the Incheon Asian Games that same year.

Winning two golds and two silvers at Incheon, he came under the limelight as the rising star for the Korean shooting.

For the women’s team, Kim Jang-mi is receiving the most spotlight. As the defending champion in women’s 25-meter pistol, she has nowhere to go but to stand her ground and defend her title. Yet, she is rather humble about her stature.

“If I finished the London Olympics with a silver or a bronze, I would have set a goal to take one step at a time to reach the top,” said the 23-year-old shooter. “I am going to go into the Olympics with the mindset that I am starting anew. The training is tough but I will endure.”

As the team is in the home stretch before the Olympics, which is slated to begin in less than 50 days, training is to get only more intense. But the Korean shooters are determined to reach their peak condition before the opening ceremonies on August 6.