Pantech back with new phone

Pantech back with new phone 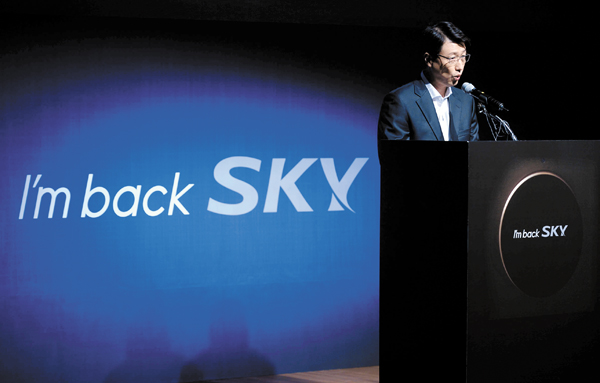 Pantech returned to the scene with a new smartphone under its signature SKY brand on Wednesday, 11 months after the smallest Korean smartphone producer was acquired by a consortium of two tech manufacturers.

It is also the first product from the storied company since it introduced the Vega Popup Note, a phablet smartphone, in November 2014.

The SKY smartphone model has been named IM-100 after the feature phone that made an enormous hit in 1998. “The naming is meant to proclaim our strong will to retain the honorable success of the feature phone,” a Pantech spokesman said. The number 100 reads as “back” in Korean.

Pantech CEO Moon Ji-uk told reporters at the launch event in Sangam-dong, western Seoul, that the phone is meant to be truthful to its core functions and not focus on the “excessive and consuming competition” with other smartphone models. 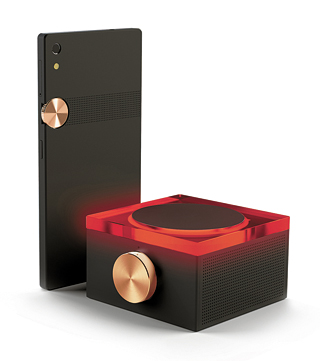 The new SKY smartphone, left, and Stone, a wireless charger and Bluetooth speaker, will be sold at SK Telecom and KT starting June 30. [PANTECH]

The budget phone boasts two main features. One is wireless charging, which has been supported only with premium models such as the Galaxy S6 and S7. Users need only to place the phone on what Pantech has called Stone, an accessory that also functions as a high-end Bluetooth speaker.

There is also a versatile wheel key mounted on the back of the phone. Users may adjust the volume that consists of 100 levels and set the timer on the phone and unlock the phone with the wheel key.

Powered by Android Marshmallow 6.0.1, the SKY is 7 millimeters (0.3 inches) thin and is 22 grams (0.8 ounces) lighter than its direct predecessor Vega Iron 2 at 150 grams. It runs on Qualcomm’s SnapDragon 430 processor and is equipped with a 5.15-inch full high-definition liquid crystal display and 32-gigabytes of storage.

The SKY will be sold through two telecom operators - SK Telecom and KT - beginning June 30 for 449,900 won ($390), almost half the cost of Samsung’s latest flagship Galaxy S7 smartphone. When the government subsidy is taken into account, prospective buyers may grab the phone at about 200,000 won.

Given the midrange price, the SKY is likely to compete against Samsung’s Galaxy A and Galaxy J smartphones as well as LG’s X series.

Pantech has much at stake with the new product. After hitting its peak with the megahit SKY handset 18 years ago, the company went through two different periods of painful debt workout programs between 2007 and 2014 due to a liquidity crisis.

In 2011 and 2012, the phone manufacturer bet on expensive premium smartphones, setting the price of its Vega Racer series similar to Samsung’s flagship Galaxy devices, but in vain. It filed for court receivership in August 2014, and the court approved a local consortium’s plan to resuscitate the cash-strapped company in May 2015.

Sony is joining the domestic smartphone competition as it is scheduled today to unveil the Xperia, the Japanese electronics maker’s first smartphone to hit Korea in 22 months.