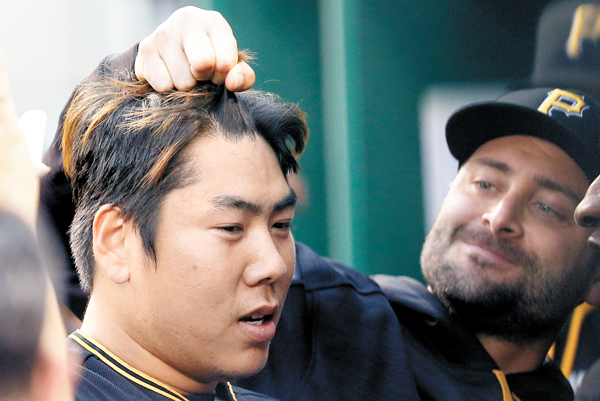 Pittsburgh Pirates’ Kang Jung-ho, left. gets his hair pulled by teammate Francisco Cervelli in the dugout as the Pirates celebrates Kang’s solo home run against the San Francisco Giants on Thursday. [AP/NEWSIS]

Pittsburgh Pirates’ Kang Jung-ho and Texas Rangers’ Choo Shin-soo each launched a home run on Thursday as they continue their runs in the U.S.-based league.

While Pirates’ third baseman Kang Jung-ho belted his 10th home run of the season, outfielder Choo of the Rangers blasted his second after bouncing back from earlier injuries.

During a Major League Baseball game between the Pirates and San Francisco Giants at PNC Park in Pittsburgh, Pennsylvania, Kang smacked a solo homer in the bottom of the third inning to extend the Pirates’ lead over the Giants to 6-1.

After grounding out in the bottom of the first, Kang’s home run came during his second at-bat. After two consecutive strikes, Kang hit the third pitch by Jeff Samardzija. The Giants’ starting pitcher tossed an 88-mile-per-hour slider, which Kang cranked over the center fence to add a run.

The 29-year-old Korean has smashed more than 10 dingers for the second straight season. The National League Rookie of the Month last year collected 15 home runs, before his season was cut short with an unexpected torn MCL injury in September 2015 that suddenly ended his otherwise decorated first year. The Major League projects Kang will collect 19 home runs by the end of the season.

Despite Kang’s home run, the Pirates conceded six runs over the fourth to sixth innings and eventually lost the game to the Giants 7-6. Kang was unable to make contact in his later at-bat and concluded the day going 1-for-4. Kang is batting .276 this season as of Thursday.

The Rangers’ Choo also blasted a solo homer during the Rangers’ home game against the Cincinnati Reds at Globe Life Park in Arlington, Texas. Batting first and playing in right field, Choo went 1-for-3 while adding two runs for the Rangers with a hit and a base-on-ball.

At the bottom of the fourth inning of the game, Choo went to the plate but walked to first base when Reds’ pitcher Dan Straily tossed four balls. Straily struggled on the mound against the next two batters, allowing Rougned Odor on base with a hit by pitch and Nomar Mazara with four balls. Eventually, Choo drove home when his teammate Adrian Beltre singled on a sharp ground ball.

Choo’s homer came at the bottom of the eighth inning against Reds closer Tony Cingrani, adding an insurance run for the Rangers. With three balls and two outs, Choo went deep off Cingrani’s 96-mile-per-hour four-seam fastball, sending the ball to the left side of the Globe Life Park. The Rangers edged the Reds 6-4.

Choo early this year was mired by calf and hamstring injuries, causing him to be sidelined for the majority of the Rangers’ games. After hitting his first season home run during his first game back from the disabled list on June 15, his second home run on Thursday came at his 15th game this season, or 47th at-bat.