Koreans too worried to wed or raise children

Koreans too worried to wed or raise children 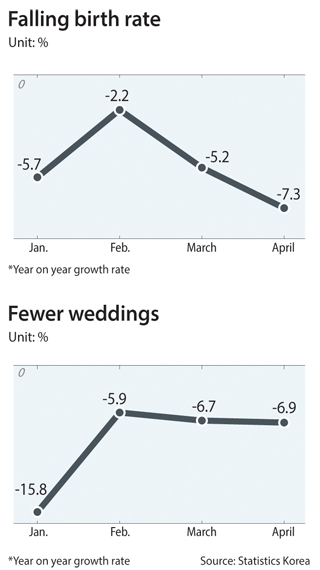 Fewer Koreans are getting married and having babies as future economic conditions continue to be uncertain.

A total of 35,300 babies were born in April, down 7.3 percent from the previous year, the lowest number for any April. The year-on-year growth rate contracted for four straight months this year, according to Statistics Korea on Thursday.

The number of people getting married, with its obvious effect on the birthrate, dropped 7.7 percent to 22,800 weddings.

“The number of marriages continued to fall this year compared to the previous year, and it is pulling down the fertility rate,” a Statistics Korea official said Thursday.

“The unemployment rate, especially for people in their 20s and 30s, continues to be high with the sluggish economy. There are just fewer Koreans getting married in general.”

Statistics Korea pointed out that the population of people at the optimal age to marry, between 25 and 34, declined from the past.

As of April, there were 3.5 million Korean males in that age range, 2.4 percent lower than in the previous year. The figure for females dropped 2.9 percent to 3.27 million in the same period.

Meanwhile, the number of babies born in 14 cities and provinces, including Seoul, Busan and Daegu, dropped, although the number increased in Sejong City, where thousands of civil servants are being transferred.

In terms of weddings, three cities and provinces, including Daegu, Ulsan and Jeju Island, recorded an increase in April compared to the previous year.

But the number fell in eight regions, including Seoul, Incheon and Gwangju.

A Statistics Korea report released earlier this year pointed out that the demographics of marriage continued to deteriorate in 2015 as the economy struggles, young people have trouble finding jobs and more women decide to pursue careers.

In fact, the average age of a Korean bride last year was 30 - the oldest ever - and the number of women marrying in their early 30s doubled over the last 10 years.

“Korea now faces three big problems: fewer women in their childbearing years, a falling marriage rate and people avoiding having babies after getting married,” said Lee Sam-sik, a researcher at the Korea Institute for Health and Social Affairs.

“We need to change the whole environment in which people avoid getting married and having babies due to social and economic reasons.”