Yoo tries out acting his age in ‘Seondal’

Yoo tries out acting his age in ‘Seondal’ 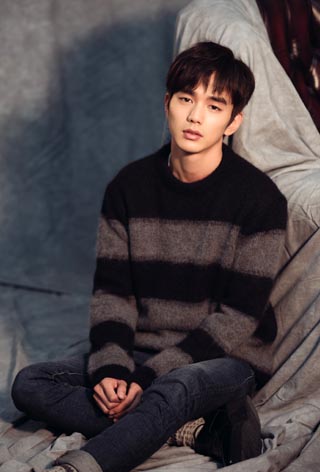 According to Yoo Seung-ho, experience doesn’t make acting any easier.

The former child actor is now 23 years old. But as the release of his upcoming movie “Seondal: The Man Who Sells the River” nears, he says his years in the business mean that people pay closer attention to his roles - and that’s both a good and bad thing.

“I feel that there are higher expectations for me, and that the public scrutinizes my work more,” said Yoo, who recently finished his military service.

To show his evolution as an actor, Yoo chose a more comical role in the period flick “Seondal: The Man Who Sells the River,” which opens July 6. He plays a con man named Kim Seon-dal who sells water from a public river, even tricking the king.

The actor sat down with Ilgan Sports, an affiliate of the Korea JoongAng Daily, to talk about what it was like to play the funny man for once.

Q. Why did you choose this role?

A. The scenario was so funny. It was the first time I burst into laughter as I read it by myself. I think it would be much more fun to watch what I was reading as a film, so I was hooked.

Any reason why you chose another period drama?

There is no particular reason for continuing to do period dramas. I just choose to do what’s fun and entertaining, and all of those happen to be period pieces.

Don’t you worry about not looking good on screen and doing what may make you look unattractive?

I don’t really worry about that. I am 23 years old, and I have said that I want to show that I can play different roles. I now have more options as I’ve gotten older, but still there are more restrictions than with other, older actors. I think I can show my cheerful side, which I have right now, through playing a role in this movie. I hadn’t done a comedy yet, so I wanted to try.

Do you think the genre suits you?

I think it was okay. If I get another chance to do a comedy, I want to be made to [look funnier]. I love making people laugh just by looking at me. I don’t know when I’ll get to do something similar again, but I have confidence that I can do it [well].

Are you funny in real life?

I try to be, but turns out I’m not. But I had to make it as smooth as possible in the movie. I usually play tricks on my mom, just like my character in the movie, so I used that side of me to act. I think I’ve become more relaxed and humorous since leaving the military.

Do you think that you have done too many serious roles for your age?

Personally, I love serious dramas. It might be hard for people to understand, but I do love gloomy and depressing movies. So I think that’s why I have been offered many such roles.

The reason I was asked to play a comical role was because it was a challenge not only for myself, but also for the director and the production company. I just wanted to show that I can look my age.

How did you feel after filming the movie?

After we wrapped up, I felt something I had never felt before. “Did I just do that? Have I been capable of doing such things?”

You have been working on many different movies since you were discharged from the military. Any reason why?

I was excited [to get back to work], so I took part in all projects that I didn’t want to miss.