‘EU is in solidarity with Korea’

‘EU is in solidarity with Korea’ 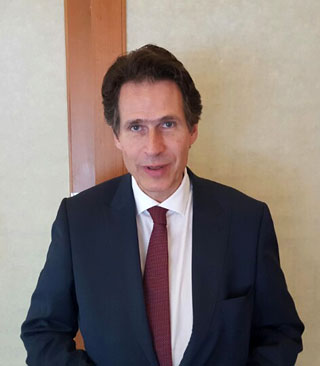 The European Union is in “solidarity” with South Korea over Pyongyang’s nuclear threat, said Gunnar Wiegand, a high-ranking EU official responsible for relations with Asia and Pacific, on Thursday.

As he sat for an interview with the Korea JoongAng Daily in central Seoul on Thursday, Wiegand, managing director for Asia and the Pacific of the European External Action Service, added that the EU and South Korea have a “dynamic, positive and result-oriented relationship where we are far from having seized all the opportunities that our new framework agreements present.”

It was the first such meeting since the implementation of a series of bilateral agreements - the Framework Agreement, the EU-Korea Free Trade Agreement and Framework Participation Agreement - which cover the overall relations between the European bloc and Seoul.

“We are a close partner of [South] Korea and we are in solidarity with Korea in view of the nuclear threat,” said Wiegand, underscoring the EU’s statement released earlier that day in response to Pyongyang’s launching of two back-to-back intermediate-range ballistic missile (IRBM) tests on Wednesday.

The EU said North Korea “must abide by all its obligations and halt all launches using ballistic missile technology,” which violates UN Security Council resolutions, and that it must also “refrain from any action that could further increase regional tensions.”

“We also recently adopted a series of autonomous measures on top of the UN Security Council resolution,” he said.

On May 27, the EU implemented additional restrictive measures against Pyongyang for its fourth nuclear test in January, in addition to the UN Security Council Resolution 2270 adopted on March 2. Wiegand’s visit included meetings with Korean officials such as Kim Hong-kyun, the special representative for Korean Peninsula peace and security affairs, and the Blue House national security adviser, namely to discuss matters related to North Korea.

He also visited the demilitarized zone. “I think the EU-Korean relationship is one of the most advanced we have with any partner,” said Wiegand. “We have a new overall framework that allows us to deepen our foreign policy and security cooperation and our sectoral cooperation in many areas. We have this significant FTA agreement applied since 2011, which has led to a boost of EU-Korea trade.”

The two sides also agreed to launch a Korean emission trading system (ETS) project, through which the EU would share from its experience best measures for companies to reduce carbon emissions.

Wiegand also said there are new projects in the works in fields such as ICT (information and communications technology), clouding and the internet, as well as in nanotechnology, biotechnology and medical research.

“While we have significant programs in Europe,” he said, “we see that Korean experience is particularly dynamic and positive and that is something we can very much learn from and work together on.”