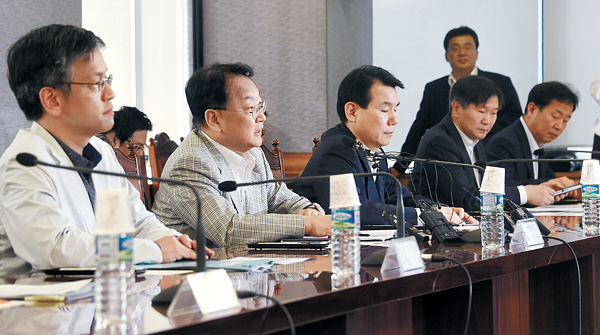 Deputy Prime Minsiter of Economics and Finance Yoo Il-ho, second from left, announces the government’s response to Brexit at the Korea Federation of Banks building in Myeong-dong on Sunday. [MINISTRY OF STRATEGY AND FINANCE]

Fearing that the negative impact from the United Kingdom’s decision to leave the European Union might continue this week, the Korean government has stepped up its efforts to preemptively ease any anxiety investors might have.

On Sunday, Deputy Prime Minister on Economics and Finance Minister Yoo Il-ho stressed that the government will closely monitor the impact that the Brexit will have on the Korean financial market as well as the global market.

“We have to take notice that the market instability caused by the Brexit is different from the several financial crises that we have experienced in the past and the situation is much more difficult to predict,” the finance minister said during an emergency economy meeting. “The 2008 global crisis and the 2011 European fiscal crisis were caused by actual problems in financial transactions due to financial and fiscal insolvency, but the Brexit is a spread of anxiety in the financial and real economy by non-economic factors and the complicated politics of European countries are making the prediction of the future that much more difficult.”

However, Yoo stressed that as the vote has long been scheduled, the governments and central banks of major countries have had time to prepare for the possibility of Brexit and have already announced market stability plans. He added that the Korean economy is stronger than it has been in the past with foreign reserves amounting to $370 billion.

“We will act boldly to stabilize the market in the short run,” Yoo said, adding, “in addition to this, we will also strengthen our communication with market participants both home and abroad.”

“The Brexit is a political issue and not a crisis caused by financial or fiscal insolvency. Through the numerous crises that we have gone through, we have built the ability to withstand external conditions,” Yim said.

After the United Kingdom voted to leave the European Union, many investors were concerned as to what impact Brexit would have on the Korean stock market and, in the long run, the Korean economy.

The global stock market lost more than $2.5 trillion in value on Friday as major exchanges including New York, Tokyo, Paris, Frankfurt, Shanghai and Seoul were all hammered as indices fell at least 3 percent. Seoul lost more than 47 trillion won ($39.8 billion) in value on its stock exchanges.

LIG Investment & Securities, in a report released on Friday, projected that the Kospi could fall to 1,820, which is equivalent to when the market was shaken after the Chinese central bank made a surprise move in devaluating its yuan in 2015. But this is only if last week’s UK decision is swiftly handled with policy coordination among advanced economies. If the situation fails to be controlled and triggers the breakdown of the European system, the Korean market could spiral down to the 1,720 level, which is equivalent to when the 2008 global crisis began.

Several leading economists, including Korea Institute of Finance President Shin Sung-hwan, said the immediate influence of the Brexit would not be the same as the global crisis of 2008. But the impact it could have on the Korean economy may grow if the situation continues.

“For most [Asian] economies, the direct export exposure to the UK was less than 1 percent of the GDP in 2015,” said Frederic Neumann, HSBC co-head of Asian Economics Research. “If the broader EU were to experience a growth slump as a result of Brexit, the impact on Asia would be more material.”

He added, “Even Korea and China (over 3 percent) are materially exposed to the wider EU.”

The Finance Ministry, which is expected to announce its plans on managing the nation’s economy for the second half of the year on Tuesday, has already given up on the idea of 3 percent growth. But in the hopes of preventing the economy from falling further it has made it clear that it plans to tap into the supplementary budget. Although the government has not provided any details as to the size of the additional budget, think tanks like Hyundai Research Institute have claimed that it should be around 26 trillion won.