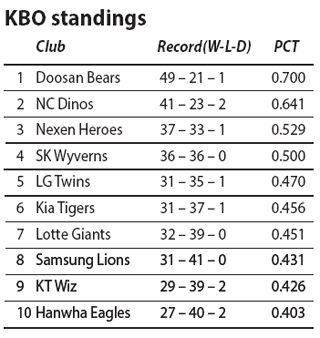 KBO announced on Monday morning the result for the third all-star game ballot and NC Dinos’ star outfielder Na Sung-bum topped the list for the three consecutive weeks for the outfielder position for the Nanum All-Stars.

If Na maintains the lead until the end, he will be the most popular player in the KBO for the second time in his career after 2014.

Hanwha Eagles’ outfielder Lee Yong-kyu was closely after Na, behind the Dinos player only by 11.371. Each time the result of ballot is announced, the discrepancy between the two is being narrowed and fans anticipate the final outcome might be flipped around in the last minute. In comparison, fans saw a drastic change for the third baseman position in the Dream All-Stars. The Bears’ Hur Kyoung-min, who was second to the Wyverns’ Choi Jeong, beat Choi narrowly by 7,775 to claim the top for the first time. But, with the difference in the number of votes between the two third baseman small, heated competition between Hur and Choi is expected until the end.

General outlook on who will be included in the all-star game by position is being finalized, as most of the positions are seeing more than 200,000 votes difference between players, but who will be representing the Dream All-Stars for the third baseman position and outfielder position are still up in the air.

The KBO will announce the final roster for its all-star game on July 4. Fans can participate by voting online. 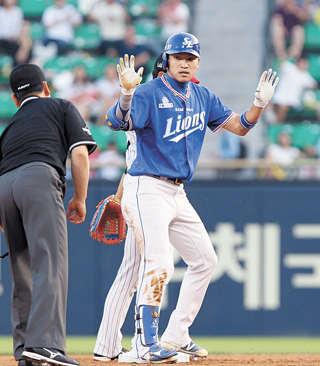 It seems as if Park Hae-min of Samsung Lions can handle any position. His brilliance in fielding is especially evident when he is in the outfield.

The 26-year-old Park is quick and agile, not to mention he has wide and clear vision. Both enable Park to show off diving catches often in the outfield. “His fielding, especially in the outfield, is top of the league,” says Ryu Joong-il, the Lions’ manager.

Park first found himself as a first baseman in 2014 when he first came up to the starting roster for the Lions. Back then, he often went into the game as a sub for then-starting first baseman Chae Tae-in who plays for the Nexen Heroes now. Although he played as an infielder at the second base up until high school, he became an outfielder in college.

Playing first baseman, especially starting on the position, is new for Park. But this does not stop him from putting out a solid performance as an infielder. He is showing off his diving catches once more and catching the ground balls seem to come to him naturally. “I think I am doing fine,” Park said.

“It was a lot of pressure at first,” added Park. “But I have grown a lot more comfortable on first base. These days, I concentrate on playing first baseman during team practice.”

“First baseman has a lot of responsibility, it turns out,” Park said. “I have to understand all the fielding tactics and formations. One mistake by an infielder leads to a fielding error. I have to also prepare myself for a bunt.”

Park’s brilliance in fielding is always the most notable when he’s an outfielder. During the games against KT Wiz from June 25 to 26, Park played as an outfielder for the first time in a while. “It’s exciting playing an outfielder,” he says.