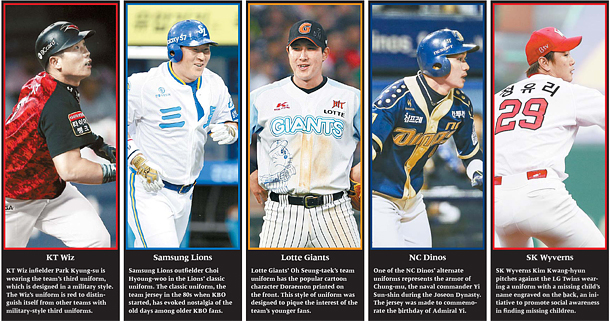 The popularity of the Korea Baseball Organization is skyrocketing each year with the number of fans attending the games increasing by season. Behind the curtain of the success is a constant effort by the KBO clubs to offer the fans a more entertaining experience besides the baseball game itself. Their latest move is new uniforms that are unique and trendy in style and design.

When the KBO’s Lotte Giants and Samsung Lions stepped into the Busan’s Sajik Stadium before their match Wednesday, fans could not miss what they were wearing: classic uniforms the two teams wore when the KBO was established in 1982.

Some of the older baseball fans who remember the KBO games from the ’80s and early ’90s could not help but be reminded of the bygone days when the KBO gained its prominence in Korea.

The game between the two Gyeongsang-based teams wasn’t the first KBO game where players wore different sets of jerseys.

Fans living in Seoul saw their city team in a different style of uniform last week when the LG Twins wore military-style uniforms during the team’s home game at Jamsil Baseball Stadium. The uniform was designed to commemorate the month of June, which is Memorial Month in Korea, a time designated to remember the veterans and war heroes who fought and died during the Korean War that started June 25, 1950.

The military-style jersey was immediately popular among fans, with nearly 500 reportedly being sold in just three days.

Considering that about 7,000 to 8,000 units of regular Twins jerseys are sold each season through various channels, the popularity of the military-style uniform far surpassed that of its counterparts.

These new sets of player uniforms are called “third jerseys” or “alternate uniforms” in the Major League. The clubs try to integrate fans’ demand and the unique brand of their team with new uniforms other than the home and away outfits.

In the KBO, the Giants have developed the most alternate uniforms. They have introduced uniforms designed with popular cartoon characters, the UNICEF logo as well as the classic layout. Some of these uniforms are so popular among the fans that they sold out within a couple of months after launch.

The demand for these new uniforms increased as the team’s fan base was extended to include more children and women, who are more responsive to new designs and colors. “Fans can now experience the pleasure of picking uniforms of their choice,” said a staffer from the Giants.

As the third jersey became trendy, teams such as the Twins who were previously reluctant to create new uniforms, began to see a need to develop new outfits to meet the demand.

Since it was founded in 1990, the Twins squad had introduced only one third jersey, the “Summer Christmas” uniform in 2011. The team traditionally preferred to stick to their old style of pinstripes. Thus, the Twins introducing a military-style uniform last week comes to as a surprise, yet it’s a palpable indicator of the current trend in the KBO.

Military-style jerseys are especially popular in the league, not only with the Twins but also teams such as the Hanwha Eagles, SK Wyverns and KT Wiz who designed their third uniforms this year in military style.

The NC Dinos decided to cooperate with a local military unit to celebrate Yi Sun-shin, a Korean naval hero of the Joseon Dynasty. The team’s jerseys were designed to look like Yi’s armor.

The cost of these uniforms range from 70,000 won ($60.42) to 130,000 won. And fans are forking over the money to cheer for their teams while wearing these uniforms with their favorite players’ names printed on the back.

For the KBO clubs, this kind of loyalty generates a tremendous amount of profit. About 30 percent of SK Wyverns profit from selling jerseys comes from the sales of its third uniforms. For other teams as well, financial revenue generated from merchandising these jerseys is quite lucrative.

“What the popularization of alternate uniforms indicates is essentially the market diversification in Korean professional baseball,” said Choi Joon-seo, a professor of Department of Sports Industry at Hanyang University.

The teams’ third uniforms have even evolved as a tool to communicate corporate social responsibility.

Last week, five players of the Wyverns came out for the game wearing uniforms with the names of five missing local children printed on their backs in place of their own names.