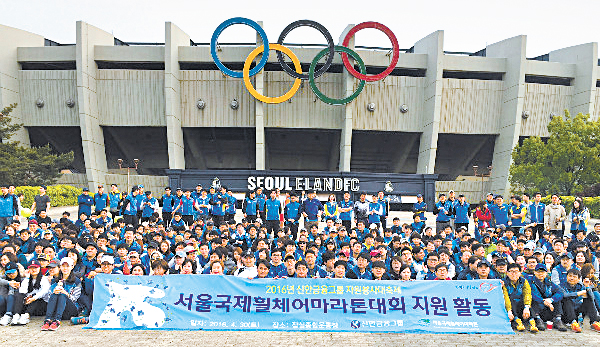 To promote its corporate social responsibility (CSR) efforts, Shinhan Financial Group (SFG) established the CSR Committee in its Board of Directors in 2015. The committee ensures the group’s CSR activities are centered on the ideas of “Coexistence (Welfare)”, “Sympathy (Culture)” and “Symbiosis (Environment).”

SFG has established “Shinhan Smile Microcredit Bank” to boost the economic independence and self-sufficiency of financially underserved people such as those with low incomes. As of the end of 2015, SFG supported 7,366 people with 102.6 billion won ($88.7 million) in “Smile loans”.

To narrow the educational gap between regions, SFG has conducted a project called “Arumin Library.” The project has established 422 libraries in community child centers, children’s hospitals and social welfare centers all throughout the country.

Recently, SFG held its “2016 Volunteer Service Grand Festival,” a 60-day event that takes place each year through April and May to provide the local community with practical support. The event has taken place since 2008.

This year, SFG focused on supporting the socially disadvantaged, including projects like constructing playgrounds inclusive for those with disabilities.