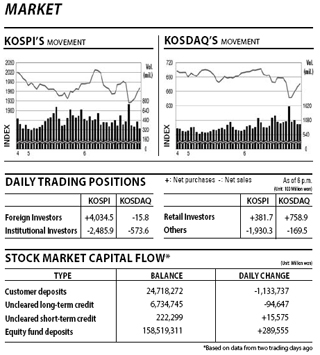 But a rumor that Samsung Group Chairman Lee Kun-hee had died shook the market temporarily, leading the stock price of Samsung Electronics to rise as high as 1,439,000 won ($1,252) at one point during the session. The company denied the rumor.

“Korea’s stock market will show a rise in the short-term due to relieved sentiment on Brexit as well as the government’s stimulus strategy,” said Jeon Se-woong, an analyst at KR Futures.

Market bellwether Samsung Electronics closed at 1,425,000 won, sharply rising 2.08 percent due to the Lee Kun-hee death rumor. The rumor spread through social media and mobile messengers around noon. It said the group would announce Lee’s death at 3 p.m. 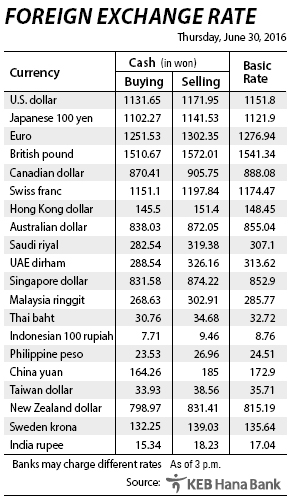 The company immediately denied the rumor but Korea Exchange asked the group to post a regulatory filing about the rumor. The deadline is today at noon.

Analysts say the rumor might have been started by investors trying to manipulate stock prices for profit-taking.

The secondary Kosdaq reached the 670-level also for the first time in five days on the back of continuous retail investors’ purchases.

It closed at 675.09 points, up 0.78 percent from the previous day. Pharmaceutical company Celltrion rose 1.8 percent while IT firm Kakao edged up by 0.9 percent.

The Korean currency appreciated 8.4 won to close at 1,151.8 won against the greenback.