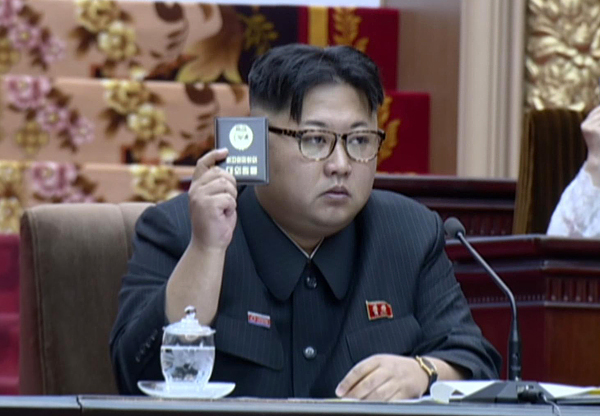 North Korean leader Kim Jong-un was given the title chairman of the newly-created State Affairs Commission (SAC) at a meeting of the rubber stamp parliament Wednesday, the latest appointment aimed at bolstering his leadership over the totalitarian state.

To underscore Kim’s absolute authority, North Korea also revised its Constitution to define him as the “Supreme leader of the Republic.”

The state-run North Korean media reported that the young leader was elected with unanimous support from members of the Supreme People’s Assembly (SPA) as chairman of the SAC, which replaces the military-oriented National Defense Commission (NDC), which he served as first chairman. The new state body has expanded authority over state affairs as it deals with unification, foreign affairs and economic affairs in contrast to the NDC, which primarily dealt with defense.

The North Korean state-run Korean Central News Agency on Thursday quoted SPA deputy Kim Yong-nam, also a member of the political bureau of the central committee of the Workers’ Party, as saying it was “unshakable faith and an answering of the will of” all North Koreans “to uphold Kim Jong-un,” whom he described as representing the cause of socialism and revolution in a speech before parliamentary members on Wednesday.

Hwang Pyong-so, Pak Pong-ju and Choe Ryong-hae were appointed vice-chairmen of the SAC, while eight officials including Kim Ki-nam and Choe Pu-il were made commission members. To accommodate organizational changes and Kim Jong-un’s new title, Pyongyang revised its Constitution. In it, Kim is referred to as the “Supreme leader of the Republic.”

To further glorify state founder Kim Il Sung and his son Kim Jong-il, who ruled the country for 17 years from 1994 until his death in 2011, the North stipulated that its socialist Constitution was the equivalent of the Kim Il Sung-Kim Jong-il Constitution.

The Constitution stipulates Kim Jong-un is the supreme commander of the country’s armed forces and has the authority to declare a state of emergency and of war. It states he has the power to oversee state affairs as well as appoint and dismiss government officials. He can also form a national defense committee in time of war.

The last time North Korea amended its Constitution was in 2012, when it declared the late Kim Jong-il as the “Eternal Chairman of the NDC” and defined itself as a nuclear state. State founder Kim Il Sung was declared “Eternal President” in 1998.

The latest moves are seen as the young North Korean leader’s attempt to cement his grip on state affairs by claiming the top post of the SAC with officials with proven loyalty to him appointed to high positions.

The NDC was a state organ used by his father in his military-first policy, in which he directed resources to the military before anything else.

Since Kim Jong-un took power in December 2011, he shifted his priorities away from the military and to the Workers’ Party, with more emphasis on reviving the economy. “The Kim Jong-un power structure was formed by the creation of the SAC to replace the National Defense Commission as a follow-up measure to the seventh party congress,” the Ministry of Unification in Seoul said Thursday.

Kim’s Wednesday appointment came less than two months after he was named chairman of the Workers’ Party and confirmed his dual-track byungjin policy of developing nuclear weapons while trying to improve the moribund economy.

On the economic front, Kim unveiled a five-year special economic development plan at the party congress, and the country reiterated its pursuit of the program on Wednesday but without setting any targets. “It appears to have been a burden on the part of North Korean officials to specify their targets in the five-year plan [as they could fail to deliver them],” a Unification Ministry official said.

The official said the appointment of Premier Pak Pong-ju, also a member of the party’s central military commission, reflected his critical role in the five-year plan.

Pak, a 77-year-old economic technocrat, is believed to know more about the state of the North Korean economy than anyone else. Pak’s drive to allow free enterprise to some extent and raise consumer prices and wages was said to have enraged hard-line Communist believers in Pyongyang, which could have led to his demotion from premier to supervisor of a chemical factory by Kim Jong-il a decade ago.

In 2010, South Korean media reported that Pak appeared to have been executed by a firing squad for his role in the North’s botched currency reform. But he was brought back as premier in 2013 by Kim Jong-un.

In what could be an editing mistake by Korean Central Television, Kim was caught seemingly dozing off during the Wednesday meeting. In a 25-minute clip of the assembly meeting aired by the state-run channel, Kim was seen with his eyes closed for about five seconds before the picture turned to the audience.

Kim is said to have executed defense chief Hyon Yong-chol in April last year for subversion for dozing off during a meeting presided over by Kim, according to the National Intelligence Service in Seoul.