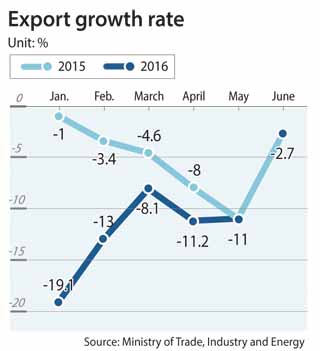 Korea’s monthly trade balance surplus was $11.6 billion in June, hitting an all-time high largely thanks to increases in exported computer and semiconductor products.

In June, Korea exported goods worth $45.23 billion and imported $33.7 billion worth, according to data released by the Ministry of Trade, Industry and Energy on Friday.

But exports continued to fall, for the 12th consecutive month, by 2.7 percent year on year in June. Even so, the ministry found a thread of silver lining, noting that the 2.7 percent drop was the best export performance since June 2015.

“Exports of major export goods such as semiconductors, computers and vessels improved in June compared to the past,” Lee Min-woo, a director at the Trade Ministry, said.

In fact, exports of vessels (up 30 percent) and computers (up 20 percent) increased strongly during the past 12 months. Semiconductor exports fell a half-percent during the same period, but the figure improved to the best since September.

“The price of semiconductors in general rose, and demand for image sensors for smartphones increased significantly,” Lee said.

Exports of automobiles fell 12.3 percent, while those of cosmetics and medical supplies continued to grow.

The Trade Ministry said car exports are badly affected by the weak economies in emerging countries.

Exports of cosmetics and medical supplies rose 56.1 percent and 35.1 percent each in June.

Exports of cosmetics to China rose 17.8 percent, and those to the United States were up 50 percent.

Shipments to the EU were up nearly 60 percent; the EU and U.S. figures are calculated on a much smaller base than that of China’s.

The Trade Ministry said exports to Vietnam are growing rapidly because of semiconductor and telecommunication product shipments.

“There were fewer business days in June than in June 2015, and domestic and foreign uncertainties such as Brexit increased, but we believe Korea managed to maintain a recovery,” Lee said. “We expect that statistics for the second half will be better since data shows that there will be more global trade later this year.”

Exports in the first quarter were $241.8 billion, down 10 percent from the same period last year.