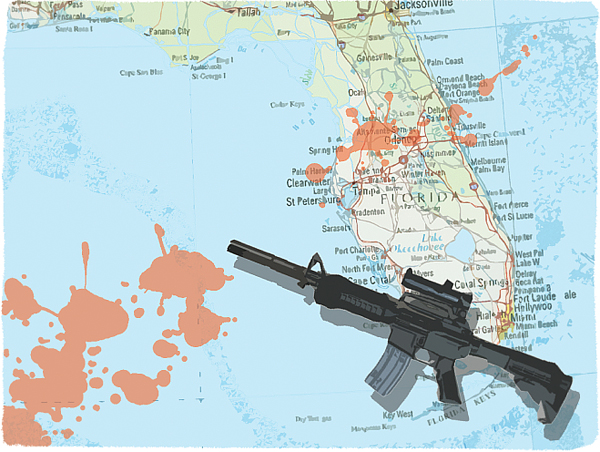 President Obama’s frustration following the slaughter at a gay nightclub in Orlando Florida was palpable. During his term, the U.S. has witnessed the three most deadly mass shootings in its history; killings at two educational institutions — Virginia Tech and Sandy Hook Elementary School — round out the list. What accounts for these tragedies and why can’t we stop them?

The answer to the first question is straightforward. The U.S. has a high rate of mass shootings because it has — and by far — the highest number of guns per capita in the world; indeed, there is almost a gun for every man, woman and child.

The headline cases do not begin to capture the scope of the underlying problem. In 2015, there were no fewer than 372 mass shootings, defined as those killing more than four people. 475 people were killed and 1,870 wounded in these attacks. Behind these spectacular cases is the steady drip of homicides using guns, which have hovered around 11,000 a year for over a decade.

Only the willfully blind can avoid the obvious. The reason for the incidence of gun deaths in the United States is in the first instance the sheer number of guns in the society.

The “why” is more complex and hinges on the ambiguously-worded Second Amendment to the Constitution and some curious features of American political institutions and processes. But beyond the politics is a deeper oversight: the failure to acknowledge the public and private costs of mental illness.

The Second Amendment reads — in its entirety — as follows: “A well regulated Militia, being necessary to the security of a free State, the right of the people to keep and bear Arms, shall not be infringed.”

The role of popular militias in America’s war for independence is the stuff of legend. The Second Amendment would appear to support an armed citizenry only in the context of “well-regulated militias” — which no longer exist. But in a string of important decisions, the Supreme Court has interpreted the rights of citizens to own guns expansively.

Underlying these judicial decisions is politics. Despite the fact that substantial majorities prefer increased controls such as background checks, such controls have proven impossible to legislate. Unlike Korea, the U.S. has an upper chamber that over-represents rural areas. Primary elections in Republican districts also encourage challenges from politicians — and interest groups — with intensely-held views: on abortion, on social issues and on guns. These institutional factors have allowed the gun lobby, spearheaded by the National Rifle Association (NRA), to wield outsized legislative influence.

Gun politics plays out against a background of deepening political polarization. On the extreme right of the political spectrum are groups which actually call themselves “militias,” arguing that an armed citizenry is necessary to check the abuses of a tyrannical government.

Although by no means as extreme, Republican leaders were quick to play to the politics of fear in the aftermath of the San Bernadino and Orlando shootings. Because Omar Mateen had declared allegiance to the Islamic State (ISIS), a number of politicians — including Donald Trump — jumped to the conclusion that the Orlando shooting was a terrorist incident. It was quickly revealed that Mateen was not only a disturbed individual, but probably gay himself and troubled by his own sexuality. Nonetheless, as Democrats quickly learned, a climate of fear — whether of terrorist attacks or random shootings — is not conducive to gun legislation. To the contrary, gun sales in the United States typically spike following such incidents and efforts to craft legislation quickly failed.

Between the politics of fear and the attempt to portray the incident as an assault on the LGBT community, a more obvious conclusion presents itself: the need to take mental health issues much more seriously. The United States shares with Korea a reluctance to think of psychological disabilities as imposing the same costs on individuals — and society — as physical maladies. But how else to explain the great mass killings in history, including that by Woo Bum-kun in Uiryeong in 1982?

Mental health advocates rightly worry about drawing a link between mental illness and violence. The majority of those suffering from acute mental illnesses are not violent, or if they are, are likely to turn against themselves. Over 60 percent of all deaths from guns in the United States last year were suicides and the suicide rate in Korea is the highest in the OECD. But as our societies become more complex and diverse, schools, churches, doctors and employers in both the U.S. and Korea need to tune into these problems. And not only because of the occasional and extreme violence that can erupt, but from the daily weight — and debilitating stigma — that these problems pose for the victims and their families.