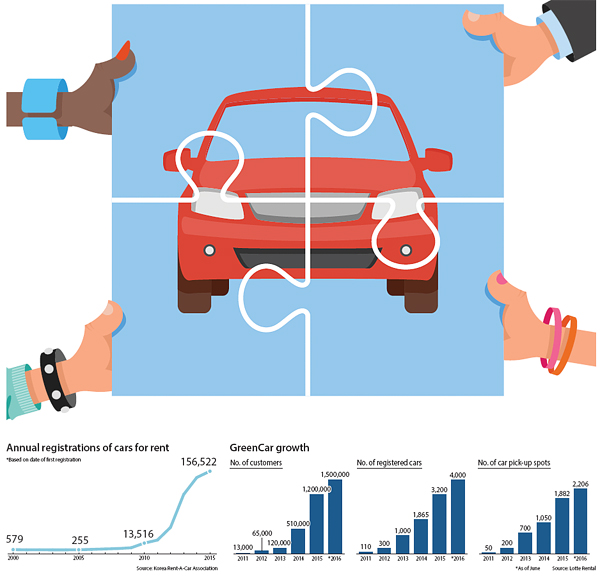 Car-sharing service operators are experiencing a rapid expansion in their businesses. The first company to start car sharing in Korea, GreenCar, opened its business with 110 cars in 2011.

Now the company services 4,000 cars to cater to a surging number of users, a growth of about 40 times in terms of size.

The so-called sharing economy has given rise to businesses in “mobility services.” While traditional businesses in the automotive industry have always been about selling cars, the new era embodied by ride-hailing apps like Uber are putting a strain on traditional car manufacturers while handing opportunities to fresh businesses.

GreenCar’s number of registered members grew from 13,000 users in 2011 to 1.5 million in June. Its competitor Socar, established in 2013, also runs a brisk business with two million member customers and more than 5,000 cars.

The service is spreading among millennials increasingly looking for cheaper and convenient “on-demand” mobility options.

“I’ll probably own a car in the future, but for the time being, a car-sharing service is an affordable and easy-to-use option - enough to satisfy my needs,” said a 25-year-old researcher at a car manufacturing firm surnamed Kim who frequently uses Socar.

Car sharing is a relatively new concept in Korea, where registered users on the car-sharing mobile app can rent cars on a 10-minute basis, a more flexible option compared to conventional car rental services. After reserving a car, customers can pick up their chosen vehicles at a nearby un-manned station. Smart keys are delivered immediately through the app.

Lotte Rental increased its investment in GreenCar last year from a 52.33 percent ownership stake in GreenCar to 91.97 percent, hoping to diversify its business portfolio and prepare for future declines that might occur in the overall automotive and transportation industry.

“When new business models take on the market, like Kakao Taxi replacing the former call-taxi service [reserving taxis on call], we don’t know who will actually be most hit by the new service,” Seo said. “It could be the automotive industry, car rental business or even the public transportation system, and we ought to be prepared.”

So far, the changing mind-sets among drivers are positively impacting the rental industry as car buyers look for affordable and flexible options to use cars for longer periods of time such as a year or more. New long-term car rental programs enable customers to rent cars in their preferred color, model and options for at least a year and for as long as five years.

Long-term rental customers increased to 30,791, 18 times more than the 1,689 people who opted for it in 2010 among individual customers, the company said.

In a glimpse, those most worried about the emergence of new services are auto manufacturers.

“I think it’s reasonable at the moment to think automakers will be hit by the sharing economy since the concept of sharing itself means a car used to be owned by one person is now shared by several others,” said Kim Joon-sung, senior analyst for cars at Meritz Securities.

“It is the industry’s common view to think the car-sharing service will nibble into automakers’ profits,” said a spokesman from Hyundai Motor.

The concerns are rooted on the thought that car sharing could essentially mean fewer car sales.

However, a Deutsche Bank analysis says the fall in vehicle numbers due to the sharing economy will ultimately be offset by shorter vehicle life spans.

“In the long term, car manufacturers may be selling cars less to individual customers but selling more frequently to car rental or sharing business operators as those cars are more likely to wear out faster due to a high utilization rate,” Kim from Meritz said.

But until a fully autonomous car is paired with such car-sharing services, like what Uber is aiming for, there are still hurdles to achieving a complete on-demand service for these car-sharing companies, which leaves room for customers to bank on their own cars in the end.

“These rental services run out of cars, and especially quality cars, when I’m most in need of cars, and I have to return them back to the pickup spots in time or else I have to pay fines,” said Jo Eun-nam, a 27-year-old Seoul resident who recently rented a car for travel to Gangneung, Gangwon. “I had to hurry back home because of the time limit but paid fines anyway because I couldn’t make it in time due to traffic.”

Toyota and Uber’s memorandum of understanding signed last month was the latest in a string of automaker and ride-sharing company marriages to strengthen collaboration on new mobility services. Their announcement came just hours after Volkswagen announced a $300 million investment in Tel Aviv-based Uber rival Gett.

Even tech giant Apple got in on the game, injecting $1 billion in Chinese ride-share company Didi Chuxing weeks before the two automakers, while General Motors in January invested $500 million in Lyft, the second-largest ride-hailing service provider in the United States.

Other carmakers are offering car-sharing services, such as BMW with DriveNow mostly in Europe and the United States, while Daimler, the owner of Mercedes-Benz, is operating Car2go, an on-demand mobility service on Smart two-seaters manufactured by Daimler.

Korea has been slow to adopt the changes taking place in the world’s transportation sector due to government regulations.

Uber came under various regulatory snags after introducing UberX in August 2014, which let anyone with a car and driver’s license offer rides at a budget price over general taxi rates.

Travis Kalanick, CEO of the ride-hailing company, was indicted in 2014 along with Uber’s local rental-car partner MK Korea for violating the Passenger Transport Service Act.

Current law forbids companies to earn profit through private or rented cars that are not registered taxi services.