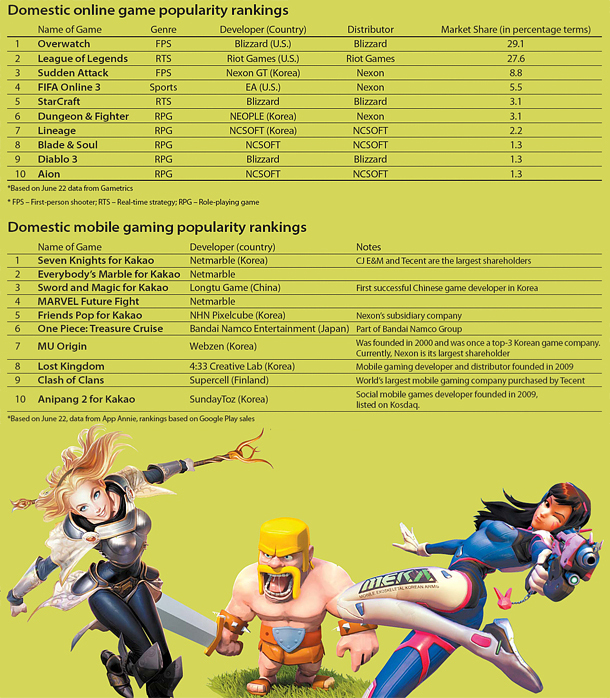 With its lively e-sports competitions, Korea is well known for its computer game industry, but foreign companies still dominate the global and domestic markets.

The American video game developer Blizzard Entertainment’s first-person shooter (FPS), Overwatch, claimed the top spot in the Korean online game market within 30 days of its release. The new game dethroned American developer Riot Games’ League of Legends, which had kept the top spot for 204 weeks. Overwatch is on pace to capture 30 percent of the market soon. That kind of domination is almost unheard of, but Overwatch has shown itself to be no ordinary game. Blizzard released the game on June 24, and within a day was in third place among video games with nearly 12 percent of the market. Three days later, it overtook Nexon GT’s Sudden Attack, which has been in the market for 11 years, to claim second place.

Overwatch’s success, if not the degree, was expected. Blizzard Entertainment produced the popular StarCraft and Diablo games in the past, and has a history of making good games. Korean gamers share that view, and a stroll through an Internet cafe here will show the company’s games on several monitors. About 9.7 million people played Overwatch in pre-release tests, breaking the developer’s own record for test participation, and pre-orders were sold out. In just one month, Blizzard posted an astonishing $69 million in revenue from Overwatch.

In Korea, Overwatch and League of Legends share more than 50 percent of the internet cafe game market. Nexon’s Sudden Attack, in third place, is about the only salve to the Korean game industry’s pride. FIFA Online 3, developed by Electronics Arts of the United States, is in fourth place. With $4.5 billion in sales last year and 300 million users, EA is a computer gaming titan. 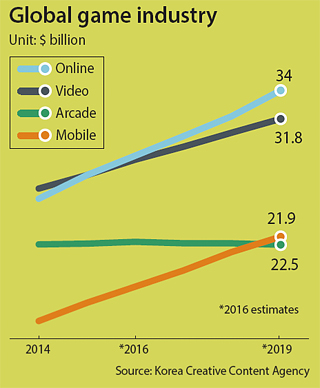 Founded in 2006, Riot Games released League of Legends in 2009 and has posted $1 billion in sales thanks to it.

The Chinese IT company Tencent has connections with both Blizzard and Riot Games. Tencent bought a 12-percent share of Blizzard Entertainment when its parent company, the French media company Vivendi, merged with Activision to form Activision Blizzard. It acquired Riot Games in 2011.

Last Wednesday, Tencent took over the Finnish video game company Supercell to boost its already commanding position in the game industry. It paid $8.6 billion for 85 percent of Supercell shares, including a 73-percent stake sold by the Japanese telecommunications company SoftBank.

Founded in Helsinki in 2010, Supercell developed Clash of Clans, a popular game worldwide. With only 180 employees and four games (Clash of Clans, Hay Day, Boom Beach and Clash Royale), the company dominated the global smartphone software market with 2.7 trillion won in sales last year. Supercell should be able to solidify its position in the Chinese market thanks to its takeover by Tencent. By linking its online purchasing system to Tencent’s e-commerce system, Supercell seems headed towards increased profits. In return, Supercell has given Tencent a solid footing in the online and mobile game industries. Tencent also invested $126 million in Glu Mobile in 2014.

During the negotiations for Supercell, Tencent announced that it would guarantee autonomy to Supercell. It also promised autonomy to Riot Games, and so far the Chinese owners have seemed to keep those pledges.

That may not last forever, though. Tencent recently formed a marketing partnership with the French luxury brand LVMH, which holds the French fashion company Louis Vuitton and the advertising company Publicis. Tencent wants to expand its presence in the advertising market, and could opt to add advertisements to Supercell’s profit model, which has so far relied on user purchases in the games.

“Tencent has 13 percent ($11.1 billion) of the global game industry thanks to the takeover of Supercell,” the market researcher Newzoo says. “In the past, the company has experienced difficulties with sales outside of China, but that concern has been wiped out with this takeover.”

According to the Korea Creative Content Agency, Tencent posted 17.1 billion yuan ($2.6 billion)）in sales in the first quarter, a 28-percent increase over last year. More than half of Tencent’s sales come from its video games.

What can Korea do to keep its toehold in the market? To enter the Chinese market, they must cooperate with Chinese firms, which include Tencent. Last year, Tencent acquired a 25 percent share of Netmarble Games, Korea’s first mobile gaming company to post a trillion won in sales. Tencent is now Netmarble’s third-largest shareholder. It is also Kakao’s third-largest shareholder with 8.3 percent. Tencent is believed to have made other undisclosed investments in Korean firms, so it seems clear that it has a commanding position in the Korean industry, which automatically leads to concerns about Chinese domination here.

The news is not all gloomy for Korean game companies, though. The optimistic view is that the strong competition they faced last year has toughened them for efforts to penetrate new markets. Korean companies can also take advantage of recent game trends, the most prominent of which is Overwatch’s success and the proof it offers that online gaming (as opposed to mobile phone games) is a viable sector. Overwatch has shown that online FPS games are not out of fashion and that any high-quality game will be popular.

“Most mobile gaming companies saw a drop in performance in the first quarter of this year,” said the Kiwoom Securities’ analyst Kim Hak-joon. “While this is partly due to advertising competition with foreign companies, it is also a sign that the domestic mobile gaming market has reached its limits.”

Foreign game companies used top models to showcase their products. The actor Liam Neeson advertised Clash of Clans, while members of the popular prime-time TV show Infinite Challenge appeared in a Candy Crush commercial. Korean companies tried to compete by investing heavily in ads, but faltered when trying to link those ads to marketing and development strategies.

“Last year, Korean game companies prioritized the mobile gaming industry, but they have realized that the online game market is much easier to operate in,” said Kim Chang-hyun of NCSOFT. “Overwatch showed that a well-made game will be popular on any platform.”

One thing to watch for in the Korean game industry for the rest of this year is how domestic game companies will respond to Overwatch’s popularity. Last year, Nexon focused on distributing mobile phone games produced by small and medium companies. The company did not fare well in the first half of this year; it became embroiled in a scandal with Jin Kyung-joon at the center. Jin was the chief prosecutor of the Korean Immigration Service and was accused of receiving money from Nexon and using insider information to turn a 12 billion won profit in the company’s shares.

Nexon will launch Sudden Attack 2 on July 6; a lot is riding on the new release. Until Overwatch swept the domestic market, Nexon held the top spot for first-person shooter games. The signs were good at the end of last week; 290,000 gamers preregistered for Sudden Attack 2.

NCSOFT was never at the top of the mobile gaming industry, but some analysts argue that it is on the road for success thanks to its struggles in mobile gaming. With a new online gaming focus, it can concentrate on Lineage and Blade & Soul, its mainstays in that market. It plans to release Lineage Eternal next year, another online game in that series.

But it has not abandoned mobile gaming entirely, a decision that is probably sound but still chancy. NCSOFT will release a mobile phone game later this year based on the online game Lineage, but its impact is hard to predict.