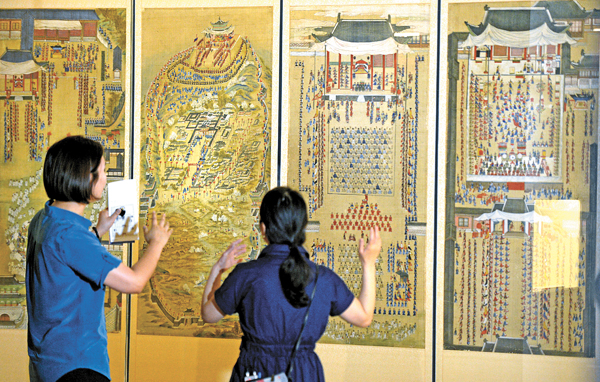 Researchers at the National Palace Museum of Korea explain the “Eight-panel Folding Screen of Royal Procession of the Royal Tomb of Crown Prince Sado in Hwaseong” displayed in the third section during the press opening of the exhibition “Royal Tombs of the Joseon Dynasty” on June 20. [NEWSIS]

In the concrete jungle of the upscale Gangnam District, southern Seoul, there’s a vast tract of green where Seoulites go to find peace of mind.

It’s called Seonjeongneung, and while many think of it as a spot for an al fresco lunch or a weekend stroll, it’s also where two royal kings of the Joseon Dynasty (1392-1910) are buried.

There are 42 royal tombs from the Joseon Dynasty still intact today. Excluding the two located in North Korea, 40 were registered as Unesco World Heritage sites in 2009.

According to the National Research Institute of Cultural Heritage, since the royal tombs were to bury the “transcendental beings with absolute authority and dignity under the Confucian ruling ideology,” every aspect - from the selection of the sites and construction to the maintenance post-completion - proceeded under strict state regulation.

For those who want to know more about the royal tombs, there’s a special exhibition taking place at the National Palace Museum of Korea located inside Gyeongbok Palace in central Seoul.

The exhibition, titled “Royal Tombs of the Joseon Dynasty,” is provided for free and runs until Aug. 28.

Despite having gone through troubled times like Japanese colonization (1910-45) and the Korean War (1950-53), most of the royal tombs stayed intact, which the museum says is unmatched “anywhere else in the world.”

“The National Palace Museum of Korea has organized this special exhibition with the National Research Institute of Cultural Heritage and the Joseon Royal Tombs Management Office in order to illuminate the value of the royal tombs and to enhance our understanding of them,” said Choi Jong-deok, director of the National Palace Museum. “Various related relics, photographs and video clips are presented here in detail to facilitate a better understanding of the history and system of the royal tombs of the Joseon Dynasty, their architectural characteristics, and the various rituals performed at the royal tombs.” 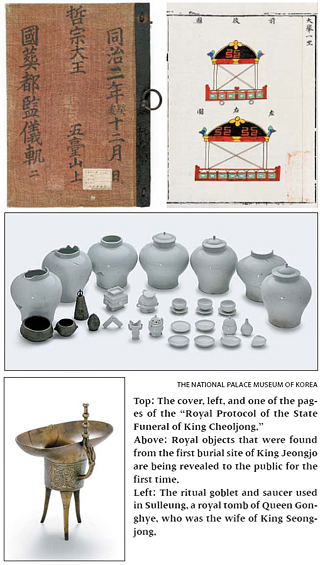 The exhibition is divided in four parts, helping visitors to understand how the royal tombs were constructed, how they were newly organized in the Joseon Dynasty, how ancestors were honored and how the tombs were managed.

In the first section, visitors can learn how state funerals were carried out in the Joseon Dynasty. Here, large illustrated maps showing bird’s-eye views of where some tombs are located amid vast stretches of forests and hills.

According to Park Soo-hee, a researcher responsible for the exhibition at the museum, it took five to seven months from the death of the king or queen to the actual burial. During this time, the royal tomb site was selected and a burial mound was installed, along with extra facilities and stone structures.

“It was important to select the right site for the tombs as well,” said Park, adding that the site had to be “auspicious” according to geomancy. “The distance from the capital city to the tombs should be also kept not too far to hold ritual performances and for maintenance.”

As soon as the site was selected, construction began immediately. Temporary facilities were put up to conceal the construction process. When construction finished, the coffins of the deceased king or queen were buried according to official procedure and the process was completed.

“The whole procedure from the death to the burial took about 27 months and about 70 steps to follow,” said Park.

In the second section, visitors can learn about how the new system for royal tombs was devised during the Joseon Dynasty.

Although there had been a preexisting system during the preceding Goryeo Dynasty, the new system was adopted early during the Joseon Dynasty and included many different and specific modifications.

A management office was located in the entrance area where rituals and worship ceremonies are prepared. The ritual area, according to Park, was “where the spirit of the king and the worshipers meet.” It was here that pavilions were erected, behind which was the burial area centered around a burial mound.

Also in this section, visitors can look at photographs of real royal tombs scattered around the country and study the different types.

“Because the royal tombs of the Joseon Dynasty were constructed according to the rules of Five Rites of State, there were no significant changes in spatial organization and the system,” said Park. “However, because of various factors such as regional characteristics and circumstances of the period, there were royal tombs that were exceptionally constructed and visitors can take a look at those unique tombs in this section.”

Since royal tombs are not excavated, it’s rare to see what kind of objects were buried alongside kings and queens. But in this section, visitors can see for the first time ever some items buried alongside King Jeongjo, including white porcelain and lacquerware.

“King Jeongjo’s tomb was exhumed and moved to the current site Geolleung in 1821 upon the death of his wife Queen Yuoui to be buried together,” said Park. “In 2011, there was an excavation to study his initial tomb site and these royal objects have been excavated, which are being revealed to the public for the first time.”

Although people visit royal tombs casually today, back in the Joseon dynasty, the spots were significant, sacred places where the reigning kings paid homage to their deceased predecessors. As a result, various rituals were held at the royal tombs on the annual day of death, but also on events like the birthdays of the deceased kings and queens or the end of the year.

In the third section, visitors can learn about the different types of rituals and the complex procedures behind them.

One of the most difficult rituals was the relocation of a royal tomb.

According to the museum, there were 17 steps to relocating a royal tomb in the Joseon Dynasty. Most had to be moved for reasons of geomancy, but in some cases, politics was the cause. The section offers an extensive explanation of which is which.

In the final section, visitors can see how systematically the royal tombs were managed for the 500 years of the dynasty, which enabled the tombs to remain intact today.

According to the museum, the royal tomb management officers were considered to have high ranks in society. They spent much of their time in the management office of their royal tomb, where they oversaw the preparation of rituals and the maintenance of stone sculptures, pavilions, grasses and trees.

Despite such in-depth archiving, it’s difficult to really grasp what exactly the royal tombs look like unless a visitor actually heads to the site.

To help give an approximation of this, there are six virtual reality devices installed at the end of the exhibition for visitors to take a walk through an actual tomb. This virtual tour gives access even to otherwise prohibited areas of real royal tombs. An audio guide in English, Korean, Chinese or Japanese is provided during the tour, which that takes about seven minutes.