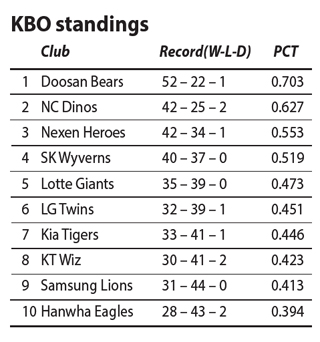 All Stars named for July 16 classic, Dino’s Na is top choice among fans and players

The starting lineup for the KBO All-Star game was announced Monday. The 12-man rosters for the two All-Star teams are headed by the NC Dinos’ star outfielder Na Sung-bum, who led in this year’s combined player-fan voting. The voting for the KBO All-Stars ran for 25 days, with the votes translated into ranking points.

Na was the only player among the 120 candidates for an outfielder position with the Nanum All-Star team to accumulate more than 60 points. Although he trailed Hanwha Eagles outfielder Lee Yong-kyu by more than 7,500 fan votes, he dominated in the voting by his major league peers to move into the lead.

On the Dream All-Star team, the Doosan Bears’ pitcher Dustin Nippert topped the voting. He received 56.13 points, winning 980,000 fan votes and 186 votes by fellow players. Nippert currently has the winningest record in the KBO with 11. This is the first time the West Virginia native has made the KBO’s All-Star roster.

The KBO All-Star game is slated for July 16 at Gocheok Sky Dome, Seoul. 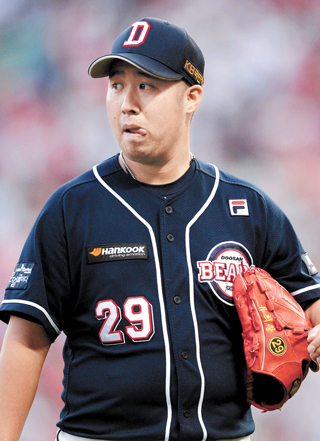 During a game against the Hanwha Eagles on Saturday, the Bears’ pitcher Yoo Hee-kwan proved once again why he is often referred to as the “Eagle killer.”

The 30-year-old managed seven innings of work on July 2 against the Eagles, yielding five hits, three walks and one run while grabbing two strikeouts to pick up his eighth win of the season.

In the past four years, the southpaw has seven wins and only one loss against the Eagles, with an earned run average of 2.19 in 13 games.

His numbers are even more impressive in the last year alone.

He started in five games against the Eagles, clinching four wins and no losses with an ERA of 1.96. “I hoped the game would not get rained out,” said Yoo after the win on Saturday.

His eagerness was justified. The only run that he gave up came in the second inning. With one out and two runners on base, a sacrifice fly ball by Eagles’ outfielder Yang Sung-woo brought home a run.

Yoo also pitched out of two scrapes, in the first and fourth inning, with an Eagle on third base. He threw 101 pitches in his seven innings with 55 of them strikes.

While Yoo was busy on the mound, so were the Bears batters at the plate. Kim Jae-hwan, second in the league this year in home runs, smashed his 21st of the season in the second inning. His solo tally gave the Bears an early lead.

By the end of the game, the score was 4-1, extending the Bears’ winning streak against the Eagles to eight.