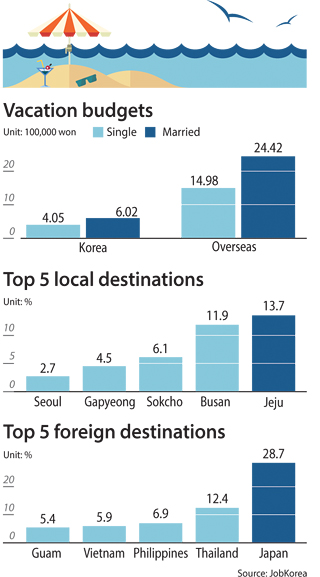 Over 80 percent of Korean workers say they are planning to take a summer vacation this year, and more than 75 percent are going to take it in Korea, according to JobKorea, one of the country’s major job information portals.

The southern island of Jeju is the most popular destination for this summer with almost 14 percent, followed by Busan with almost 12 percent and Sokcho with about 6 percent.

Among the roughly 25 percent of Koreans planning on going overseas this summer, about 29 percent said they are going to Japan. Thailand came in second with about 12 percent, followed by the Philippines with about 7 percent, Vietnam with about 6 percent and Guam with about 5 percent.

According to the survey, which was released on Friday, about 25 percent of people are taking vacation in the first week of August and another 17 percent said they are going in the last week of July.

Among survey respondents who said they are not planning to take vacation, about 41 percent of those who are not taking vacation said it was due to their heavy workload, followed by budget issues (28 percent) and a desire to avoid crowds (15 percent).

Meanwhile, another report released by Hunet, an education agency in Korea, showed that the amount of money Korean workers spend on vacation has decreased due to the sluggish economy.

Hunet surveyed a total of 853 Korean workers. More than 80 percent of Koreans said they are taking vacation with their family members and about 6 percent said they will spend it alone.

This was followed by people who are dating (about 5 percent) and who will spend the time with friends (about 4 percent).