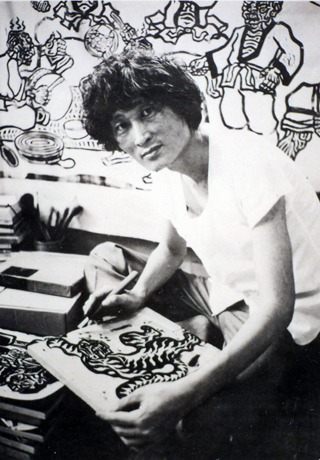 O Yoon (1946-86) works on the woodblock for his 1985 print “The Dancing Tiger.” Woodblock prints were his vehicle for using traditional Korean elements to portray the country’s chaotic society in the 1980s. [GANA ART CENTER]

He is remembered in the art wold as a maverick of the 1970s and ‘80s. Artist O Yoon (1946-86) did not latch onto the ideology of anticommunism or define himself by supporting or opposing the brutality of the military dictatorship. Through his artworks, he confronted the reality of modern Korea.

O defied trends in modern Korean art, which focused largely on Western styles. He cut blocks of wood to create prints that portrayed traditional performances and Korean customs. Each carving manifested his thoughts. He sharpened his knife blade with an ardent soul. Poet Kim Chi-ha analyzed his artworks as a reflection of the vitality and spirit of the grassroots.

In minjung art, O is regarded as a special figure because his works portray ethnic traits that are presented with satire and humor. Minjung art, or the people’s art, was created in the period between the 1980s and early ‘90s. It was a movement of realist paintings that convey social or political messages against the Korean military regime and conservative politics in the later period.

Farmers and laborers in O’s works do not look gaunt. Their sorrow and pain seem to be resolved through the convivial touch of the artist, so the characteristics of the figures draw the viewer’s attention.

He carved figures like dokkaebi, or goblins. The series “Dokkaebi” conveys the people’s spirit and their vivacity. One of the works in the series portrays the dokkaebi dancing, drinking and playing drums. With liveliness and humor, O sought a way to relieve the burden of a chaotic society.

O’s idiosyncratic style, thus, was a reinterpretation of traditional themes in a modern way. The representative style of his woodcut prints are their thick lines, signifying a potent force, with carvings of varying depths. At a quick glance, the works seem to be rough. A closer look shows both the simplicity and dynamics of life.

“O studied sculpture at Seoul National University, and that major influenced his artworks greatly,” critic You Hong-june said in a lecture last Saturday in the Gana Art Center. “He carved the lines quite thick, similar to quarrying out when shaping his sculpture.”

In the beginning, in the 1960s, O’s works mostly featured lower class laborers carved in woodblocks. In the 1980s, he took ordinary people, alienated or suffering in a chaotic society, as his main subjects.

O did not only concentrate on woodcut prints but tried to widen his art spectrum. Diverse tools such as crayons, brushes and color pencils were utilized in a range of artworks, including oil paintings and terracotta. Despite the different genres, they all express vitality. The mixture of different materials, colors and shapes creates the dynamism.

O’s drawings take human figures as their central source. It is the fundamental basis of his art. And the drawings of O reflect something of his personality as well.

“He practiced drawing the lines of the dancer’s movement repeatedly before he began to engrave it on the woodblock,” You explained. “Sometimes it took him a day and night to get a satisfactory line of an arm’s shape.”

“It was his persistent effort and thoroughness in the process of creation,” You added.

The auction price of O’s works is unexpectedly high, five to six times higher than their estimated price, which rarely occurs in the art market.

“O’s art is acclaimed for its uniqueness in the historical evaluation of Korean art,” Yoon Beom-mo, an art critic and exhibition manager, explained. “The drawings tell us the sincere stories of ordinary people from O’s perspective especially during his searching days when young.”

Kim Ik-gu, O’s brother-in-law, recalled how passionate O was about his work.

“He was very academic when he was immersed in the theme he chose for his artwork,” Kim said. “He borrowed textbooks about economics from me when he was working on ‘Marketing - The Map of Hell’ (1980).”

O was happy to give away prints to acquaintances rather than selling them.

“He remained nonchalant about making money out of his paintings,” Yoon said. “In his works, edition numbers or his signature are often lacking, and in the art market, they act as identification of his works.”

“It is my lifelong mission in regards to art - how it can recover the function of language,” O once said.

“O Yoon 30th Anniversary Retrospection Exhibition” is being held at the Gana Art Center in Pyeongchang-dong, central Seoul, because this year marks the 30th anniversary of his death. It runs through August 7. Though he died at the early age of 40, he left more than 250 pieces of art, which are displayed in the exhibition.

There are about 80 to 90 woodblock prints. Among them, about 60 were done when he was aware he was dying. There are about 100 drawings owned by his relatives and friends that have not been shown in public before. Through this show, it is possible to see what O dedicated his entire life to.