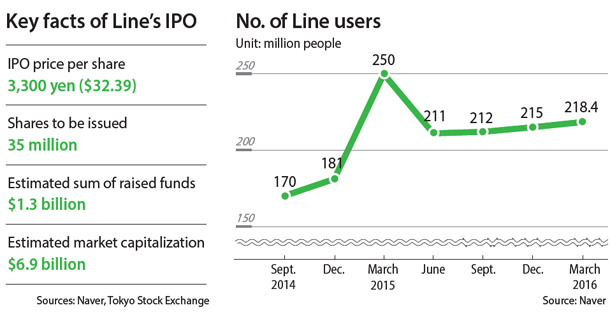 With its public trading debut set for this week, messaging app Line, a subsidiary of Korea’s search portal Naver, priced its initial public offering at 3,300 yen ($32.39) per share, the top of the expected range. The IPO is expected to be the largest in the global tech industry this year.

If the company’s offering goes as planned, the IPO will have raised some 1.5 trillion won or $1.3 billion.

Analysts say that the pricing at the top end reflects the tech company’s confidence about investors’ demand after a series of roadshows with potential stakeholders. The app operator will sell 35 million shares, 13 million of them to Japanese investors.

“The decision indicates that investors have shown fair interest for Line,” said Sung Jong-hwa, an analyst at eBEST Securities & Investment.

Line initially set the price range between 2,700 yen and 3,200 yen but pushed up the range this month to between 2,900 yen and 3,300 yen, citing the shifting demand and market conditions.

“Some say that the anticipated market valuation falls short of the initial valuation when Line first hinted its intention to go public two years ago,” Sung said, “but it is very rare that the actual market valuation stays in line with the private valuations prior to the listing.” Line filed an application to list in Tokyo in July 2014, which could value the company at 1 trillion yen ($9.2 billion), according to Bloomberg.

The proceeds will be used to spearhead expansion of the messaging app, which recently introduced different features including delivery services and live streaming.

The IPO “is intended to raise funds in order for Line to better compete with global companies with huge capital and great brand recognition,” Naver said in a statement, apparently taking an aim at tech behemoths like Facebook.

“The proceeds will be used to fund mergers and acquisitions and strategic investment to grow in the global market and Japan.”

Some analysts forecast that Line shares will be trading in line with or slightly above the asking prices.

“The strong yen caused by the ‘Brexit’ issue will work in favor of the Line IPO,” Sung said, “Besides that, Line still has a potential for further growth, though its growth pace is not as dramatic as it used to be after years of expansion.”

“There are also views that the demand will likely outnumber the issued shares,” Ahn said, “so, the share price could rise above the asking price and it will also boost shares of Naver.”

Still, the prospects are not all rosy.

Compared to global tech giants, Line has limited headway beyond its handful of strongholds such as Japan and Thailand with most of the sales generating in Japan.

Line operates in more than 230 countries and serves more than 200 million users.

The IPO is being managed by Japan-based Nomura Securities and U.S.-based Morgan Stanley, Goldman Sachs and JP Morgan, according to a regulatory filing last month.