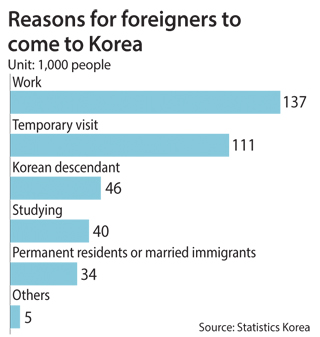 The number of foreigners legally entering Korea dropped 8.4 percent year-on-year, or 34,000, to record 373,000 in 2015, according to Statistics Korea on Thursday. The figure is for people who stayed more than 90 days. This is the biggest year-on-year drop since 2009.

“The number of foreigners in their 20s to 50s who entered Korea dropped and it fell most for people in their 40s by 21.3 percent compared to the previous year,” said Lee Ji-yeon, a director at Statistics Korea.

There were 15.8 percent more men visiting compared to women and the median age dropped 0.9 years to 32.1 years in 2015 from the previous year.

Visitors from China, Vietnam, the United States and Thailand accounted for 67.1 percent of the total. There were 177,000 Chinese citizens who entered Korea last year and 30,000 Vietnamese citizens. The number of Chinese visitors was down 8.2 percent compared to the previous year.

By gender, the number of male Indonesians entering Korea was 5.9 percent higher than their female counterparts, while there were 13.5 percent more female Americans than males.

The median age was the highest for Chinese at 41.4 years and it was the lowest for Cambodians at 24.1 years. The median age for Americans was 26.6 years.

Data showed that August was the most popular month for foreigners to enter Korea and the largest number of foreigners left in December.

The number of Koreans leaving for foreign countries for more than 90 days fell compared to the previous year in all age groups except for those in their 20s and 60 and older.

Among those who left the country, Koreans in their 20s accounted for 40 percent of the total, followed by those in their 30s at 16.8 percent and 40-somethings at 10.9 percent.

The number of Korean teenagers staying abroad fell 42.8 percent in 2015 compared to 2007, the year it peaked. The number of teens going overseas has fallen due to the low birth rate in Korea and a fall in students studying abroad.