After injury, Yang says his best days lie ahead

After injury, Yang says his best days lie ahead 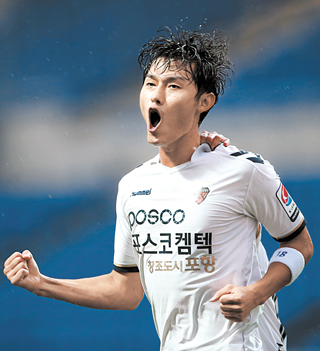 After spending a decade going back and forth between the Ulsan Hyundai FC and the Busan IPark, 30-year-old forward Yang Dong-hyen joined the Pohang Steelers before this season. The veteran of the K-League Classic thinks he has finally found a home that may allow him to live out his heyday.

In the K-League Classic at the moment, foreign players such as Tiago Alves Sales of the Seongnam FC and Carlos Adriano of FC Seoul are dominating in goal scoring. While Korean attacker Jung Jo-gook from the Gwangju FC is at the top of the goal scoring rankings with 13 goals in 57 shot attempts up until the 19th round of the season, there wasn’t any other Korean attacker that was deemed top-scorer material - not until Yang emerged as a possible candidate.

In the past six games he has played until the 19th round, Yang netted four goals and recorded five assists, scoring three games straight from June 25 to July 3. After the first half of the regular season, Yang already surpassed his performance in scoring from last year. Playing for Ulsan last season, Yang played in 30 games and scored eight goals. He has already matched that number while playing in only 16 games for Pohang this season.

“Football is fun these days,” said Yang. “Playing in a good team alongside good people, it allows me to score more goals.”

Yang, the nucleus of Pohang’s offense, has come alive. Along with him, Pohang began to perform better in the league, finally escaping the bottom pool of the league standings.

Although the Steelers lost ace forward Kim Seung-dae to Yanbian Funde in the Chinese Super League after last season, Yang has proven himself more than capable of filling his shoes.

“Manager [Choi Jin-cheul] trusts me and I try to reciprocate that,” Yang said when asked about the secret behind his recent success. “I am 30 years old, so I have been trying to take special care of my physical condition.”

In his 13th year in the pros, the clock is ticking and Yang is desperate to leave his mark in the K-League Classic. After graduating from Dongbuk High School, he trained and played for youth teams of European clubs such as the FC Metz of France and Real Valladolid of Spain. No one questioned that one day he would lead Korean football.

But the reality turned out to be more difficult than he had anticipated. Putting on Ulsan’s uniform for the first time in 2005, he was unable to stand out. Yang outperformed those around his age but it was the star K-League players, much older than Yang, who blocked his way to success.

This is evident in his goal scoring record. Although he played in the K-League Classic for 13 seasons, he netted more than ten goals in only two seasons. “I played for a long time now but my heyday is yet to come,” according to Yang. “I know scoring goals isn’t everything but injuries that mired my past seasons have often brought me down.”

Yang says he keeps a whiteboard inside his house where he writes down his goal before each season starts. At the moment his whiteboard says -10, which means he has 10 more goals to go until he finally reaches his season goal this year.