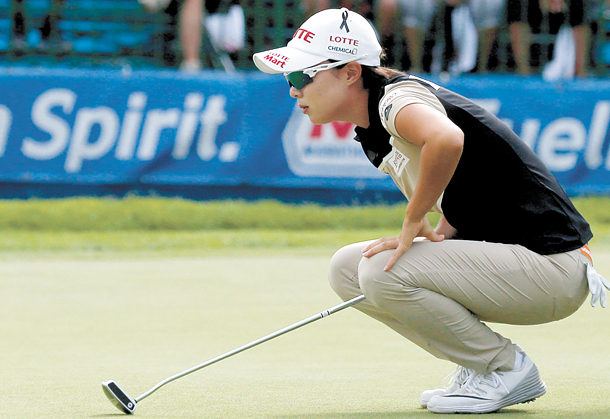 Kim Hyo-joo studies her putt during the third round of the Marathon Classic in Ohio on Sunday. Although Kim was the leader of the event by the third round, she quickly faded and finished fourth overall. [AP/NEWSIS]

Korea’s Lee Mi-rim saw her third LPGA title slip out of her hands as Lydia Ko outlasted her in a three-way playoff at the Marathon Classic in Sylvania, Ohio, on Monday.

Before the final round, it was Korea’s Kim Hyo-joo who was at the top of the leaderboard. Kim shot a sizzling 7-under par on the third day to aggregate 15-under until Sunday. By then, Kim was three strokes ahead of Alison Lee of the United States and Lydia Ko of New Zealand, who were tied at second with 12-under total.

However, the last round of the event was a nightmare for the overnight leader. Starting out the day with a bogey at the first hole, Kim had three bogeys before the ninth hole and added one more in the final stretch. Kim only carded two birdies, one at the ninth and one at the final hole.

Her performance was in stark contrast to a day earlier, when her seven birdies and no bogey effort put her in the solo lead. Kim hit the fairway on only eight occasions out of 14 chances on Monday, not to mention she got to the green for a par chance or better in just 12 holes out of 18.

While Kim struggled and finished the final day shooting 2-over par, it was her compatriot Lee who quickly darted up the leaderboard on Monday. Starting the day tied at sixth, Lee nailed two birdies and one eagle while bogeying only one hole before the break after ninth. She went on a birdie spree from the 15th to 17th holes, although her shot at the trophy without having to go into the playoff evaporated with her bogey at the 18th.

“I didn’t know I’m in the lead,” Lee told The Associated Press. “I don’t know. I just played.” 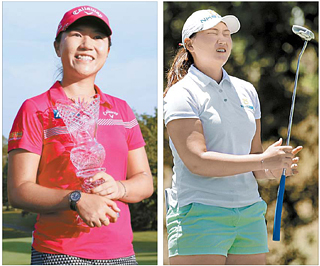 Lee Mi-rim of Korea, right, came close to winning her third LPGA title at the Marathon Classic in Sylvania, Ohio, on Monday, but her chance to win during regulation vanished when she bogeyed the final hole. Lee eventually lost to New Zealand’s Lydia Ko, left, after a three-way playoff. [AP/NEWSIS]

Ko, who started the round three strokes behind the leader, birdied four holes in the earlier half of the round. She bogeyed at the 14th and 16th hole and ended the round by parring the last two.

Thailand’s Ariya Jutanugarn, who finished the third round tied at third, drilled an eagle at the par-5 17th hole to open up an opportunity to force the playoff into a three-way instead of a duel.

When it came down to what counts, it was the top-ranked Ko who came out smiling at the end. The playoff among the trio, played at par-5 18th hole, went on for four rounds, making the Marathon Classic indeed a marathon. The 19-year-old New Zealander birdied the fourth hole of the playoff and went to claim the 14th title of her career. After her successful birdie putt, Ko celebrated her fourth win of the season by pumping her fist in the air.

“Just to see a putt drop for birdie I think I kind of got my emotions going,” Ko said. “I’m not really a huge fist-pump kind of person, but I think it’s probably the biggest fist-pump I’ve ever done.”

After a three-day break, a select group of LPGA golfers will play in the UL International Crown, a biennial women’s professional team golf tournament, starting Friday in Chicago.