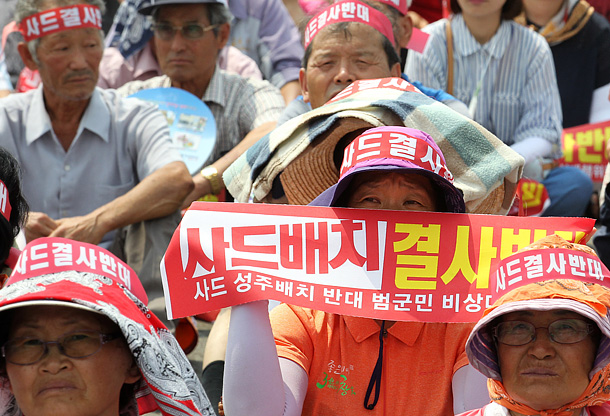 “Thaad melon” and “electromagnetic melon” are the terms that leftists have applied to melons produced in Seongju, North Gyeongsang. They make provocative allegations about the effect that the Terminal High Altitude Area Defense (Thaad) will have on local produce. Some even claim that the electromagnetic waves will kill bees and that melons won’t be able to grow. Surprisingly, people believe the rumors just like they did during the panic over mad cow disease and Middle East respiratory syndrome (MERS). Even when the Ministry of National Defense allowed media testing of the Green Pine radar, a top military secret, and when the defense minister said he would become a human subject for experimentation, these measures didn’t help. The U.S. Forces will soon make the Thaad radar in Guam public.

The leftists are fanning the fears about electromagnetic waves. “A guard standing in front of the radar during World War II died, and the autopsy showed that all his organs had dried up. Another guard experienced forgetfulness and died. The autopsy showed that his brain had melted away. The microwave was developed from the inverse concept.”

The seed of the Thaad panic was an investigative report by progressive media in Japan on June 29, 2015. The story, titled “Strong Electromagnetic Waves… Nausea and Dizziness Experienced near the Military Base,” was about Kyoto Prefecture’s Kyogamisaki site where a Thaad system is deployed. But the actual article mainly delivers the stance of a director of a group opposing Thaad. Also, the cause of the nausea and dizziness was low-frequency noise from a generator, not the ultra-high frequency waves from the radar. But the article maliciously misleads readers to think that the Thaad electromagnetic waves are associated with nausea and dizziness. Unlike Kyogamisaki, the Thaad base in Seongju would be connected to power lines, and unless there is a blackout, the power generator won’t be in operation.

If the Thaad rumors are true, scientific theories should be changed. Electromagnetic waves don’t pass through metals but are reflected, and that is how radar detects planes and missiles. Thaad radar is a precise system that can trace 10-meter-long (32-foot-long) ballistic missile in the air from hundreds of kilometers away.

As the name suggests, Thaad literally focuses on high-altitude objects. Therefore, the electromagnetic waves discharged at larger than 5 degrees from the Seongju base at 400 meter above sea level would not affect the residents and melons in Seongju in the low-lying areas. Otherwise, Thaad would be nothing but a useless 1.5 trillion-won ($1.32 billion) luxury good.

The leftists didn’t forget the urban legend that electromagnetic waves could build up like radiation. But the World Health Organization advises otherwise. Its official site states that there is no evidence of heat emission or harmful health effects associated with high frequency waves below the allowed standard. There is no need to fear Thaad electromagnetic fields below the allowed standard. The electromagnetic wave reading at 300 meters from the Green Pine radar — which is more powerful than Thaad — was only 4.4 percent of the safe limit.

I have no intention of siding with the government, which aggravated the situation by hiding behind strategic ambiguity and military security. Perhaps the crisis will only come down after a demonstration in Gwanghwamun, Seoul, just as it had been for the mad cow disease, the constructions of Gangjeong port in Jeju Island and the Miryang transmission tower.

But rumors by the progressive camp are a problem. They go against scientific theories and the official position of the WHO. The National Radio Research Agency explained that Thaad, Wi-Fi and Bluetooth use 2-300 GHZ frequencies, and there is little problem as long as it is below the safe limit. After all, humans are capricious. We complain that wifi and Bluetooth are too weak, but that the Thaad radar is too strong.