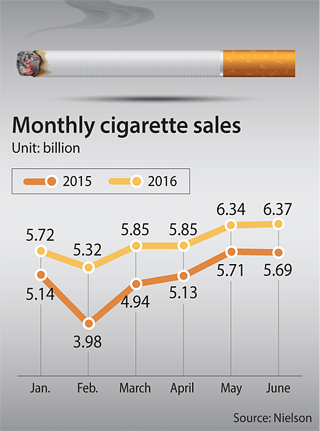 In September 2014, the government announced price hikes that raised the price of pack of cigarette 2,000 won starting on the first day of 2015. That propelled the average price of a 20-stick pack to between 4,500 won ($4) and 4,700 won, which is still the lowest among the world’s major economies.

Tobacco use is considered the leading cause of premature and preventable death in Korea.

This year, monthly sales began with 5.72 billion sticks in January and shot up to 6.37 billion in June.

Industry insiders say the decreased in sales last year was temporary for a few reasons.

“Sales of tobacco were down in the wake of the price hike because smokers hoarded a large amount before the markup,” said a spokesman for one cigarette importer.

In addition, some people genuinely tried to quit but fell off the wagon as the months went on.

The Korea Cigarette Association, which represents all cigarette producers in Korea, refused any comment on Nielsen’s data.

Tobacco sales are expected to increase further in the latter half, given habitual smokers tend to give up on New Year resolutions to quit as the year progresses.

Women smokers’ reluctance to reduce tobacco consumption is another factor going against the government’s anti-smoking initiative, according to the spokesman for one cigarette importer.

The Nielsen data contradicts the Ministry of Health and Welfare’s announcement on May 10 that the average smoking rate among male adults last year dropped 3.8 percentage points year on year to 39.3 percent. The ministry said the rate fell below 40 percent for the first time since 1998, when it began compiling related data, because of the cigarette price increase and widening of no-smoking areas nationwide.