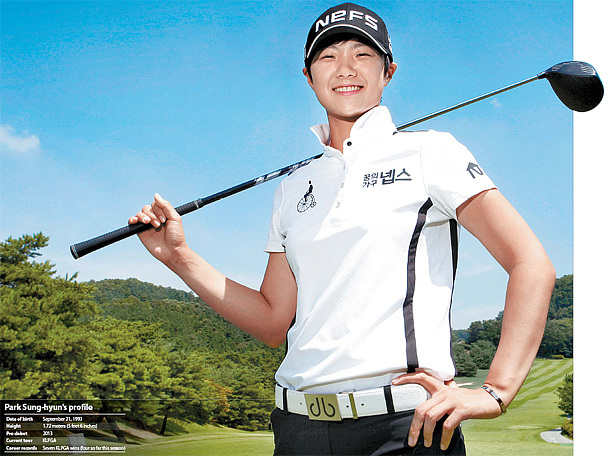 “Simply amazing.” That’s how American golfer Michelle Wie described Park Sung-hyun last year during the LPGA KEB Hana Bank Championship. Back then, Park was a virtual unknown outside Korea, with the KEB Hana Bank tournament in Incheon being her first LPGA event.

One year later, Park has risen to become one of the top golfers on the Korean circuit. Earning over 700 million won ($620,000) so far, she is not only at the top of the KLPGA Money List but also leads in categories such as green accuracy (81.36 percent) and scoring average (69.97).

When fans think of Park, it is often her driving distance and power that come to mind, and indeed, when the Korea JoongAng Daily visited her Tuesday at the Giheung Country Club, Hwaseong, Gyeonggi, where she trains on a regular basis, the 22-year-old golfer was practicing one of her signature long drives.

After withdrawing from the BMW Ladies Championship last week due to dizziness, Park seemed to have recovered well. She was tan and looked as if she had just come out of an early morning practice session. When asked about her condition, she said a few days of rest were sufficient enough to recuperate. Park had just come out of placing third in the U.S. Women’s Open the week before, and she chalked her illness up to jetlag.

Park wasn’t always getting this level of attention. Although she is the player of the moment, the road has not been easy for her.

“I first started to play golf while I was a second grader in elementary school,” Park said. “I was just watching television one day and out of the blue, my mother came and asked if I wanted to try golf.”

Park recalls saying no, but that didn’t stop her mother from registering her for classes anyway. “I went and instantly fell in love with the sport,” she said. “That’s how I started to play.”

Although she found herself enjoying the game, playing well was another story. She struggled early in her career to put on a decent performance and watched as golfers younger than her such as Kim Hyo-joo thrive and pass right by her in the rankings.

“There was a three-year gap for me, and watching other golfers with whom I played together succeed, that was tough,” Park said. “But I didn’t let it go and persevered through. I think that’s how I got to where I am today.”

Park now boasts a large fan base, and when asked why, she said, “I think it is because of my powerful swing that can hardly be found in other female golfers. I often hear that I play like a male golfer. I think fans are drawn to that. I appreciate their support.”

Park has already bested her own record from 2015, winning four trophies this year. On top of her green accuracy and scoring average, she is also the leader in number of birdies this season, with an average of 4.62 per round.

“I become more experienced as the year goes by, and I feel like this gives me more room to breathe,” Park said. “I play more comfortably and people often concur. I am more relaxed, and this allows me to play a better game.

“In terms of putting, I changed my posture during putting. Last year, I stood with my feet apart wide and had my back straight. But this forced me to be stiffer on the green. So this year, I’m bending my back a little and narrowing the distance between my feet. Each year, I think I am learning to be a better golfer.”

Even as she gains more experience on the green, she says some parts of her play will never change. “I know that I make a lot of bogeys, but this is because of my aggressive style of play,” she said. “I take this into consideration when I make bold plays. I don’t want to let go of my style.”

Park credits golfers like Tiger Woods as inspiration for her aggressive plays.

“I liked Tiger Woods and other pro golfers who are known for powerful drives growing up,” she said. “I was influenced by that.”

But if her idols were her biggest influencers, her critics come in at a close second.

“I practice my shot a lot. My critics often told me how weak I was in short games [in putting], but I stayed persistent and concentrated on my shot,” she said.

“What I need to work on to further improve my game is learning how to make better judgment in a pinch,” Park said. “I learn from my mistakes, and I consider them learning opportunities.”

With just four years as a pro under her belt and three in the top KLPGA tour, it is too early to call Park a seasoned veteran. The up-and-comer finds that she still has a lot of catching up to do before challenging the U.S.-based LPGA, in which she has only played by invitation. Just like before, the world No. 16 is learning from the many younger golfers who have passed her, such as world No. 1 Lydia Ko.

“I played with her during the U.S. Women’s Open, and every time I play with her, I have a lot of fun,” Park said. “I dream of becoming the top-ranked golfer in the world one day, and seeing Ko already accomplish that feat at such a young age [19 years old] is great motivation for me. Her ability to save par is top-notch. I have a long way to go in that regard.”

But among all the motivations in the world, it is her parents for whom Park feels the most affection and gratitude, especially her mother, who first signed her up for classes more than 15 years ago.

“She [my mother] never left my side, not even once. She is there in every tournament I attend. I know how demanding that must be,” Park said. “The only thing I can do to make her proud is to enjoy this game and reciprocate her support with wins. That will make her happy.”

She paused for a moment.

“I think she is quite happy right now,” Park said with a smile.