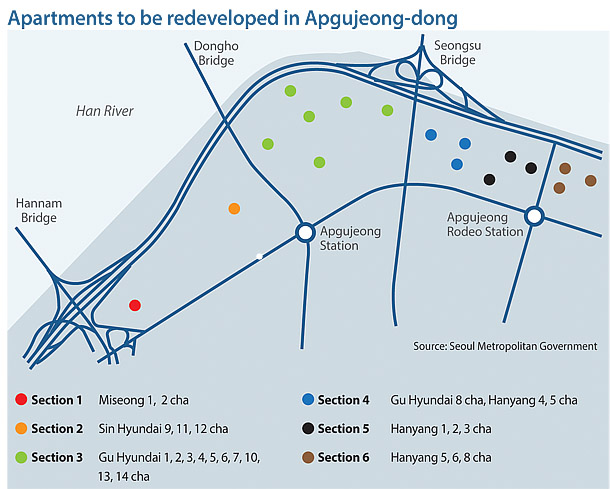 A realtor surnamed Kim in Apgujeong-dong, southern Seoul, one of the country’s most luxurious residential neighborhoods, has recently been getting more calls from customers interested in buying apartments in the area.

The problem is, he can’t find any units to offer.

Even when he does have one up for sale, the deal often fails to reach a final agreement because the landlords often end up asking for a much higher price than initially offered.

“The apartments [in Apgujeong] have seen their selling price increase 100 million won [$88,000] compared to two months ago,” Kim said. “But the landlords, expecting an additional rise on the price, have decided not to sell.”

There is growing hype in Apgujeong’s real estate market, as the Seoul government is scheduled to announce a long-awaited redevelopment plan next month. The unveiling comes two months after the plan passed a government safety inspection in March 2014.

The project includes renovations to 24 apartment complexes in the neighborhood. They will undergo changes in the number of apartment units, building height and floor area ratio, which refers to the percentage of a building’s total area compared to the size of the land on which it is built.

“The maximum floor area ratio will be 300 percent while the height will be limited to 35 stories,” said a Seoul government official.

Only one or two buildings will be allowed to reach up to 40 stories, and those buildings are to include commercial space in the lower levels, with residential space filling the rest.

When applying the new 300 percent floor area ratio, current buildings that are 10 to 15 stories high will see the number of available apartment units increase from 10,335 to 16,000.

When news of the government’s redevelopment plan first surfaced in May, sales in Apgujeong grew sharply, and so did the prices.

It was a stark contrast to other redevelopment projects in the Gangnam area, where popularity has been waning due to strong government regulations on loans in those projects.

According to the Seoul Metropolitan Government, apartments sold in Apgujeong last month amounted to 79 units, a 46 percent increase compared to May. Additionally, the number of apartments sold in June was twice the average of 32 units sold during the same month between 2010 and 2015.

As a result, the average price of apartments in Apgujeong has gone up 1.76 percent, higher than the 0.82 percent increase in May.

A 108-square-meter apartment in the neighborhood’s Hyundai 13 cha complex sold for 1.5 billion won in April. Currently, it is valued at between 1.75 and 1.8 billion won. In just three months, the apartment’s value went up by at least 250 million won.

A 108-square-meter apartment in Sin Hyundai is currently valued at 1.7 billion won, up 150 million won from two months ago.

“Apartments in Miseong and Gu Hyundai have gone up between 100 and 200 million won in the last couple of months,” said Yoon Min-young, head of real estate agency Ganaan.

When the Korean government started developing south of the Han River in the mid-1970s, Apgujeong quickly grew to become the wealthiest neighborhood in the area. But 20 years later, it gave up its No. 1 spot to neighboring Banpo-dong, largely because the apartments were getting old and uncomfortable.

As a result, residents sought to redevelop the buildings in 2006, but several attempts to launch a project failed, largely due to conflict between apartment owners and the Seoul government. The city government wanted residents to donate 25 to 30 percent of the redeveloped complexes to the city in hopes of installing public facilities like recreational parks.

The apartment owners refused, concerned about the lost potential profit from giving the land up for public use.

“The project finally started gaining momentum after the Seoul government decided to reduce the ratio of donated land to 15 percent and lowered the apartment height from 50 stories to 35 in 2013,” said Lee Nam-soo, head of the real estate business at Shinhan Investment.

Market experts say once Apgujeong gets its facelift, it will likely reclaim its status as the country’s wealthiest neighborhood, currently held by Banpo-dong and Gaepo-dong.

Two of Apgujeong’s biggest appeals are its location along the Han River and lots containing mid to large-size apartment units of 85 square meters and larger.

“Once the redevelopment is successfully completed, the apartment value will be around 60 million and 70 million won per 3.3 square meters,” said Park Hap-soo, a senior real estate consultant at KB Kookmin Bank. “Currently, the average value is between 44 million and 48 million won.”

The project, however, is still in its early stages and faces several obstacles. Industry experts speculate that it will take 10 years for the redevelopment to be completed. The long process will include the formation of a union by apartment owners to oversee the project and obtain government approval.

And apartment owners face disagreements amongst themselves. Currently, there is a scuffle over whether the maximum height of new buildings should be 35 or 45 stories.

The view of Apgujeong-dong in Gangnam District, southern Seoul, from across the Han River. [OH JONG-TAEK]