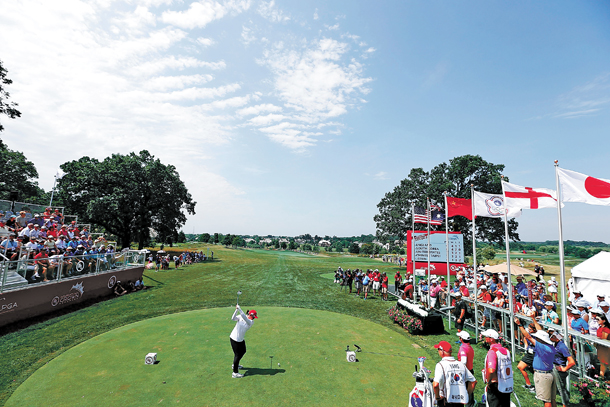 Amy Yang of Korea tees off during the final round of the UL International Crown against Japan’s Haru Nomura on Monday in Gurnee, Illinois. [LPGA]

Despite being the favorite in the UL International Crown, Korea came up short and finished runner-up in the biennial LPGA match-play tournament on Monday. The American team took home the title.

Four Koreans participated in the four-day tournament in Gurnee, Illinois. With 16 golfers out of 32 slated to participate in the Summer Olympics, the UL International Crown was considered a prelude to the Games that start next week, where golf is returning to the stage for the first time in over a century.

The top-seeded Korean team composed of Kim Sei-young (ranked world No. 5), Amy Yang (No. 7), Chun In-gee (No. 9) and Ryu So-yeon (No. 12) was assigned to Pool A alongside China, Taiwan and Australia.

On the first day, Friday, the Korean golfers played against China, taking one win and one loss. Korea played Taiwan the next day, again taking a win and loss, making them second in the pool. 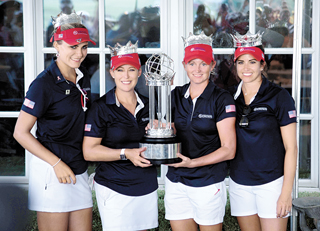 From left, Lexi Thompson, Cristie Kerr, Stacy Lewis and Gerina Piller of the United States hold up their team’s trophy after winning the UL International Crown on Monday. [AP/NEWSIS]

On the third day against Australia on Sunday, Korea was leading the match until the play was cut short due to weather conditions. Yang and Chun led Minjee Lee and Su Oh of Australia through 15 holes, while the other Korean tandem, Ryu and Kim, led Karrie Webb and Rebecca Artis up to the 14th hole.

Korea eventually defeated Australia on Monday morning before the final round that day. By then, Korea was ranked second in the tournament after England with eight points. England had nine points after the third round.

On the last day in singles play, Ryu and Kim defeated their counterparts to add four points for Korea.

The two golfers remained tied for the next two holes until the Korean added another birdie at the sixth hole to take a one-stroke lead. With two consecutive birdies at the eighth and ninth hole, Ryu led Thompson by three shots in the first half of the matchup.

Thompson managed to narrow the deficit down to one stroke by winning the 14th and 15th holes. But Ryu’s birdie on the 16th hole sealed her win, and it extended the lead again to two strokes.

With both Ryu and Thompson parring the 17th hole, the match came to its conclusion with Ryu adding two points for the Korean team.

Kim, who was the top-ranking golfer on the team, proved her skill in a match against England’s Charley Hull during the final round. Kim did not allow Hull to narrow the gap between the two by less than three strokes, and grabbing seven birdies, she concluded the match early at the 14th hole with a five-stroke lead.

After their wins, Korea aggregated 12 points for the entire tournament.

But their effort was for naught as American golfers Stacy Lewis, Gerina Piller and Cristie Kerr combined six points for the U.S. team to tally 13 points total, edging Team Korea by one point difference.

“We couldn’t win the tournament, but anyway, we still finished better than last time,” Ryu told The Associated Press. “Last time we’re third and this year second, so hopefully we can get a crown at 2018.”

Ryu’s hope may become reality. The next biennial event in 2018 will take place closer to home, at the Jack Nicklaus Golf Club in Incheon.

“I was expecting we’re going to win the tournament, and I just wanted to bring more excitement to 2018 UL International Crown in Korea, but we couldn’t,” Ryu commented about the next match-play event, “but I think it’s going to feel really awesome to represent my country in my motherland.”